The determination of politicians, not to do what is best for the environment or what is equitable, but what is most popular is undiminished 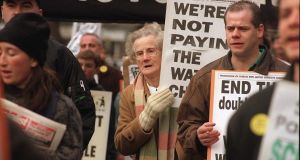 A rally organised by the federation of Dublin anti-water charges campaign. Photograph: The Irish Times 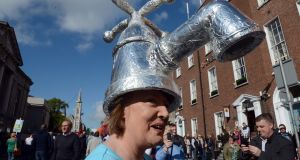 Before he had to step down as chair of the commission on water charges during the summer, Joe O’Toole was accurate in his criticisms of the posturing and blather that are central to discourse about water charges in Ireland, including from those who present their opposition as the purest form of left-wing protest there currently is. O’Toole fairly maintained “we should ensure that people would get enough water to live on adequately on the basis of not having to pay additional for that. That is a community looking after itself; from that point on, of course people should pay.”

Opponents of water charges will be protesting on the streets today and Fianna Fáil now insists the principle of charging for use should be abolished. Because such a mess has been made of this issue to date, Fianna Fáil claims, “It is impossible to see how water charges can remain.” How very convenient, and how wary we should be of the shameless, populist abolitionists. The amount of wailing about water charges is a sad reflection of shortsightedness and skewed priorities. It became clear during the negotiations to form this Government that water charges was the issue on which all would rise or fall, while once the Government was in place, it bottled the water challenge and authorised another fudge, with the freezing of bin charges.

The issue of how best to pay for basic and necessary household services has been debated vigorously since the 1970s, a decade when politicians at all levels were feeling the heat of resentment from householders about domestic rates. In 1975, the accomplished economist Brendan Walsh, who died this May, was one of the authors of a report researched by the ESRI at the request of the minister for local government, James Tully, about aspects of local authority spending and finance and domestic rates. The report identified “many conflicting pressures in providing public services efficiently and equitably: the desire to encourage local autonomy, but to avoid anarchy; to reduce regional disparities in the standard of services, while avoiding excessive local dependence on state grants; an attachment to the local property tax (the rates) as a major revenue source, but an awareness of the defects of this form of taxation”.

The authors commented on inequities in how rates were assessed, but concluded: “The most equitable way of removing this defect of the rating system is to give rates relief to low income households, by rebating all or a significant part of the rates liability of householders for whom the rates are a particularly heavy burden . . . a rates relief scheme for people with low incomes should be administered uniformly throughout the country and a significant part of its cost defrayed from central funds.”

These observations from more than 40 years ago are equally pertinent today; unfortunately, so is the political reaction to the issue. Rather than devising a reformed and fair system in the 1970s, the populist solution was deemed to lie in the abolition of domestic rates altogether, rates that yielded more than £60 million annually in the early 1970s, rising to more than £100 million by 1976. Fianna Fáil’s commitment to abolish rates was enormously popular; part of a menu of goodies that won it the general election of 1977.

The abolition of rates, however, just kicked the can down the road. A local service levy that included a water charge was introduced in the mid-1980s, but water charges were again abolished in the mid-1990s, for the simple reason that they were perceived to be damaging to the electoral fortunes of that government. Abolition also had serious consequences for the funding of local authorities; some have argued that because of the loss of rates and consequent discretionary funding for local authorities, it destroyed the chance to develop more meaningful local government and instead secured even greater centralisation of power.

In the decades since rates abolition, much has been learned about pollution, climate change and the need to think seriously about the use and misuse of natural resources. What has not changed, it appears, is the belief by many that they should not pay for water or rubbish according to their use, and the determination of politicians, not to do what is best for the environment or what is equitable, but what is most popular. The “new” politics we have been promised is, it seems, just an updated version of the tried and trusted charade.

The extent of the opposition to paying for water or waste disposal and the amount of airtime and political rows it generates lies in stark contrast to the neglect of what are much more alarming realities. It has been reported that Minister for Social Protection Leo Varadkar, for example, after taking office, was told, “Since 2011, no progress has been made on the child poverty target.”

What a tortuous business it is to develop a civic-minded Irish Republic.

1 Dublin house deaths: woman still being treated in hospital
2 A Ryan Tubridy interview takes a terrifying twist
3 Some get up early to go to the gym, others because they slept in a doorway
4 Brexit is a collective English mental breakdown
5 My husband and I like different things in bed and it's driving us apart
Real news has value SUBSCRIBE