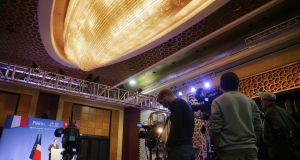 French president Francois Hollande at a press conference in Beijing on Tuesday. He is in China to discuss climate change and economic partnerships ahead of the December Paris UN Climate Change Conference. Photograph: How Hwee Young/EPA

India recently announced plans to combat climate change, while the US and China also stepped up co-operation. Where does this leave the EU, long-standing champion of climate action?

The EU’s reputation has taken a battering. From the euro zone crisis to the halting response to the inflow of refugees, the EU’s claim to be a beacon for the rest of the world rings hollow. Next month’s UN climate change summit in Paris offers an opportunity to reaffirm its international standing.

At the last climate summit – Copenhagen in 2009 – European leaders were marginalised while the US, China, India, and others carved out a minimalist deal. This time the EU’s preparations have been more robust, and it has the potential to play a much more significant role .

The EU has sought to build relations with major emerging powers over recent years, particularly China and India.

China’s leaders are waking up to the threat of climate change and it has set credible climate targets, including a pledge to peak carbon-dioxide emissions by 2030. It has also set a goal of increasing renewables and nuclear from 11.4 per cent in 2014 to 20 per cent of primary energy by 2030, equivalent to 800-1,000 gigawatts in new non-fossil energy, the entire current US generating capacity.

While drivers of change are primarily domestic, China’s leaders look to Europe and elsewhere for examples of how to move to a lower carbon trajectory.

One prominent example of lesson-learning from the EU is emissions trading, known as “cap and trade”. China has already set up seven pilot regional emissions trading schemes, and will launch a national scheme in 2017. In designing it policymakers are looking closely at the EU experience.

India is also starting to take climate change more seriously. The Modi government last week announced a commitment to reduce the amount of carbon-dioxide produced per unit of economic output by 33-35 per cent by 2030.

In contrast to China, though, India is much more wary of the EU. Indian leaders argue that since climate change was caused by the West it should be primarily the West’s responsibility to clean up the mess.

Of course the EU is not the only game in town. In the twilight years of his presidency Obama has turned to climate change in search of a political legacy. Obama has pushed forward a strong domestic response alongside an active strategy of international diplomatic engagement, including with China and India.

Climate change is higher on the world policy agenda this autumn than at any point since the 2009 Copenhagen summit. From Pope Francis to voices of global business, many global leaders are focusing their attention on the issue.

To rebuild its international reputation the EU needs to avoid backsliding on its domestic climate commitments. Here in Ireland we are in danger of missing our 2020 emissions targets by a wide margin.

The Volkswagen scandal also has the potential to damage Europe’s reputation. The EU needs to put in place stronger safeguards .

A second crucial area in the run-up to Paris is finance for developing countries targeted towards the least developed countries and low-lying island states. Perhaps more than anything else, the EU’s provision of climate finance will shape perceptions of the EU’s commitment.

Finally, the EU should push others – crucially China – to accept robust transparency and reporting mechanisms .

The road to Paris is paved with opportunities for the EU. By maintaining strong domestic commitments, providing substantial climate finance to developing countries, and insisting on strong reporting and transparency rules as part of a Paris deal, the EU can seize opportunities to reaffirm its international standing. Dr Diarmuid Torney lectures at Dublin City University and is author of European Climate Leadership in Question: policies toward China and India (MIT Press, 2015)