Church at Christmas is good for you, research finds

Even if you have no religion and worry about being hypocritical, services improve relationships 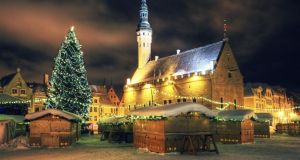 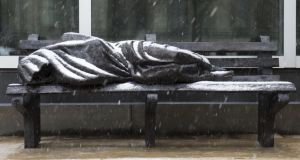 Sculptor Timothy Schmalz’s bronze sculpture Homeless Jesus, which he would like to be put in Dublin: the Dean of Christ Church referred to post-denominationalism when talking about the art work. Photograph: Carlos Osorio/Toronto Star via Getty Images

As the pre-Christmas preparations intensify, as if Armageddon is imminent, and car horns blast at the slightest delay, there are parking-place wars and queue rage, you’d be forgiven for thinking that this is the least generous and spiritual time of year.

The collective madness has its origins in what once was the comfort of the Winter Solstice; the ancient pagan rite based on the hope that the sun will return, not that our pre-ordered Christmas shopping will arrive on time.

Whether it’s about the rebirth of the sun or the birth of the son of God, we collectively suffer pre-Christmas hysteria for the reward of a few peaceful days of nesting and indulgence. A break in the year, where everything slows down.

And just as we have a deep history of our pagan origins, we also have memories of a religious element to Christmas Day. We know there’s a word within a word that barely gets a mention. Christ.

In the US, people aren’t supposed to say Merry Christmas any more: it’s Season’s Greetings. While we can still say Happy Christmas in Ireland, it’s still deeply non-PC to go to church.

Isn’t it superficial to go just for the atmosphere, the carols and greeting neighbours you haven’t seen in a while? Isn’t it a bit conformist to go to church if you’re not “religious”? Around the world, millions of people describe themselves as “Christian” without belonging to a church or attending services.

A lot of us feel that our spirituality, faith or belief system – whatever you want to call it – is no longer part of an organised religion. We don’t feel we have a spiritual home in a specific building called “church”.

This phenomenon is known as post-denominationalism. The Dean of Christ Church, Dermot Dunne, employed this phrase when talking about the significance of a statue called “Homeless Jesus” and its creator Timothy Schmalz’s wish to have it placed appropriately in Dublin, where it would mean something to Christians who are not “religious”.

This lack of a church where we might feel welcome, is a kind of spiritual homelessness. It’s not easy to have this post-denominational faith, where we believe in “something” without having a trustworthy religion to hang it on. The hunger for a spiritual home isn’t just an Irish trend – millions worldwide describe themselves as “Christian” even though they’re not “religious”.

The secularisation of Christian values has taken hold. Humanists, for example, believe that God is other people – which was Jesus’s point, actually.

Yet at the same time to admit to being Christian in certain circles is like saying you’re a spiritual Neanderthal who takes comfort in fairy tales.

In the post-denominational age, the human instinct for spiritual community intensifies in these darkest days of winter. But if we don’t believe in a particular church, where do we find one? Will the church down the road do?

Religious or not, there are many reasons why going to church is good for us. Teenagers who attend religious services with parents are more likely to feel greater well-being, while romantic partners who pray for their “significant others” experience greater relationship commitment, according to research published by the American Psychological Association this month. Studies in the APA’s Journal of Family Psychology looked at how spiritual beliefs seem to strengthen generally happy marriages. In families, it’s enough for just one member to be spiritual.

“Relational spirituality” is research that focuses on the ways diverse couples and families can rely on specific spiritual beliefs and behaviours to motivate them to create, maintain and transform intimate relationships.

Research in the Journal of Family Psychology shows how this spiritual “connectness” creates well-being. You don’t have to “believe” to benefit from being with believers. Whether you are atheist or agnostic, or whatever you choose, going to church at Christmas is good for you and your family.

We’re all part of this awkward celebration of pagan Solstice and commercial/Christian Christmas. It really is okay, this Christmas, to go to church, wherever it is and whatever it means to you. It will be good for you.

1 Ireland could lose out as France lays claim to most of €5bn Brexit compensation fund
2 Karlin Lillington: How I managed to cut my mobile phone bill by at least half
3 ‘He’s Jekyll and Hyde’: The inside story of an Irish barrister and conman
4 Admission of mistake in Oxford vaccine dose raises doubts over reliability
5 Q&A: What restrictions are going to be lifted next week?
Real news has value SUBSCRIBE