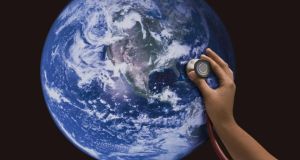 Earth: co-operation between religions on crucial issues such as climate change is vital in our modern world.

July 2016 was the hottest month since records began in 1880. Jos Lelieveld, a researcher at the Max Planck Institute has warned that large areas of the planet could become so hot that they would be virtually uninhabitable for humans.

This would trigger an exodus of hundreds of millions of refugees. According to him “the July temperatures must underline the urgency of the crisis”.

In his encyclical Laudato Si’ last year, Pope Francis expressed his concern about the impact of climate change on the poor. In the run-up to the United Nations Framework Convention on Climate Change in Paris last December, Buddhists, Hindus and Muslim groups highlighted the importance of climate change for their religions.

The Buddhist Declaration on Climate Change, published on October 20th 2015, welcomed climate-change statements from other religious traditions. It called for the phasing-out of fossil fuels.

It also challenged world leaders to generate the political will to close the emissions gap left by country climate pledges and ensure the global temperature increase remains below 1.5 degrees, relative to pre-industrial levels.

The Hindu Declaration of November 23rd, 2015, reached into Hinduism’s own unique experience of nature and called for greater harmony among all living beings. The declaration quoted the Mahabharata, which states that “dharma exists for the welfare of all beings”.

Life must be treated with respect. It asks the world’s 900 million Hindus to make the transition to clean energy, adopt a plant-based diet, and lead lives in harmony with the natural world.

International and national action must be scientifically credible and historically fair, based on deep reductions in greenhouse-gas emissions and fossil-fuel polluting technologies. It claims that renewable energies provide the best option for the billions of people to live better lives and reduce poverty.

The Islamic Climate Change Declaration affirms the intimacy of God with creation. The declaration sees the divinely ordered cosmology of creation as imperilled by human disregard of its designated role in the wider context of things.

“We face the distinct possibility that our species, chosen to be God’s caretaker (Khalifa) of the earth, could be responsible for ending life as we know it on our planet. This current rate of climate change cannot be sustained, and the earth’s fine balance (mizan) may soon be lost,” it says.

It stresses the need to limit the current rate of climate change to preserve the divinely inspired balance of creation. “We call on the well-off nations and oil-producing states to stay within the 2 degree limit, or, preferably, within the 1.5 degree” limit, bearing in mind that two-thirds of the Earth’s proven fossil fuel reserves remain in the ground.”

This is the best response to the brutal acts of barbarism perpetrated by the Islamic State (Isis) in the Middle East and in Europe itself. The last thing Europe needs is to stigmatise all Muslims for these horrible acts caused by Isis. This would only spread Islamophobia across Europe and do damage to everyone.

The spread of Islamophobia would not honour the memory of Fr Jacques Hamill who was murdered by terrorists while saying Mass in France’s Saint-Étienne-du-Rouvray, on July 16th last. The 84-year-old priest was deeply loved by both Christians and Muslims in Normandy. He was a man of peace, a disciple of Jesus. Christians are called to follow his example, especially in difficult times.

Fr Seán McDonagh is a Columban priest and eco-theologian who works to raise awareness on the links between justice and peace, environmental sustainability and faith

1 Covid-19 in Ireland: Colour-coded response set to replace phases
2 Donald Trump immediately targets Kamala Harris in campaign video
3 Moving in and out of lockdown is a recipe for economic disaster
4 Ireland among countries urged to consider reinstating Covid-19 restrictions
5 Brianna Parkins: Staycationing just means paying through the nose to sleep in someone else’s uncomfortable bed
Real news has value SUBSCRIBE