Burkini ban is another way to subjugate Muslim women

‘Given the similarity between burkinis and the wetsuits often needed to navigate the cold Irish waters, the beachside burkini question in Ireland may be a moot point’

The Australian creator of the burkini sees an increase in sales and popularity of the full body swimsuit since the temporary ban on some beaches in France. Video: Reuters 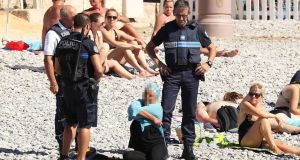 ‘Police in Nice forced a woman on the beach to remove items of clothing that they deemed were not in line with “good morals and secularism”.’ Photograph: Vantage News

The burkini brouhaha has now turned into an imbroglio following the incident on Tuesday in which police in Nice forced a woman on the beach to remove items of clothing that they deemed were not in line with “good morals and secularism”.

Why does it matter so much to anyone what Muslim women wear on the beach?

Veiling has manifested itself in a multiplicity of ways in many cultures over time. In some of these contexts women have worn the veil. In others men have veiled. Sometimes special or sacred objects have been veiled. Veiling is both a concept and a physical form.

The veil as a particular marker of identity for Muslim women has become something of a surrogate hot button issue for larger social discussions around women’s rights, terrorism and multiculturalism.

In English-language media the word veil and hijab are often used interchangeably. The Arabic word hijab translates to “curtain” or “screen”. The Koranic revelation in chapter 33 verse 53 is a key text for the justification of veiling. Here is a portion of the relevant text: “ . . . And when ye ask them [the wives of the Prophet Muhammad] anything, ask them from behind a curtain. That is purer for your hearts and for their hearts.”

One thing that is significant about this verse is its historical context. Koranic verses were not revealed in a vacuum, so contextualisation is important.

This interpretation presents the concept of hijab as a revelation in answer to a problem of social disorder and contested mores.

A subsequent verse indicates that “the Prophet’s wives, his daughters and the women of the believers” are to cover themselves in their “mantles” (jalabib, singular: jilbab), and links that command with another identity issue: namely, how members of the nascent religious community are to be recognised precisely so that they will not be abused. Another revelation addresses the modesty of both men and women.

There’s an assumption many people fall into that Muslim women have to wear the veil or are forced to do so. While that may be the reality in some cultural contexts, those types of injunctions are often more socio-cultural than demonstrably religious, as Koranic texts demonstrate. In countries such as France or Ireland, where a strong tradition of rule of law is combined with a strong tradition of civil liberties, women should be free to drop or adopt the veil at will.

Understood like this, there are better ways to go about “protecting Muslim women against patriarchy” than by firing off a burst of burkini bans.

Especially when read against the terrible history of violence in France over the past year it seems clear that the recent veil bans are knee-jerk reactions to the threat of terrorism.

It’s a human thing to lash out when one feels threatened in the face of real fear. However, that does not mean it should be legal or counted as morally right or even seen as pragmatic. In this case such reactions adversely affect a minority group already vulnerable to popular misinterpretation.

Additionally, Muslim women may be engaged in difficult rights-based struggles within their religious community of origin or affiliation; in the face of this these women should not be undermined.

Veil bans contribute little to the work of liberation; rather they become another tool for the subjugation of Muslim women. Given its colonial history and its proud tradition of liberté and égalité, this is something France should remember.

Given the similarity between burkinis and the wetsuits often needed to navigate cold Irish waters, the beachside burkini issue may be a moot point here. However, as Ireland faces its own questions around diversity and Irish identity, it must take to heart that a society’s identity is often revealed as much by what it screens as the mantle it chooses to take on.

1 How supermarkets trick us into buying unhealthy food, and what we can do about it