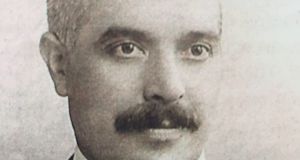 Albert Altman: was he the main model for the most famous character in ‘Ulysses’, Leopold Bloom?

When a Dubliner named Albert Altman died in November 1903, there were suspicions that his demise might have been hastened by unseen hands. He was only 52 and, as a member of Dublin Corporation, had made powerful enemies, most notably when exposing a scandal involving non-payment of rates by many of his colleagues.

In the event, his death certificate identified diabetes as the culprit, a verdict unlikely to be revisited now.

Instead, 114 years later, Altman has himself emerged as a suspect in a different kind of whodunnit, compared with which mere homicide is a trivial matter.

The detectives in this case are Joyceans. And the question is whether Altman could have been the main model for the most famous character in Ulysses, Leopold Bloom.

With any other book, this might make for minor diversion at a summer school. Ulysses, however, must be the second most-analysed work of literature, after the Bible.

For a real-life Bloom prototype to have evaded the professors this long is itself a scandal. But even so, the incident room has been reopened – anyone with information is asked to come forward.

The man with most information, for now, is Vincent Altman O’Connor, a great-grandnephew of “Altman the Saltman”, as his ancestor was nicknamed thanks to the family salt business. And for his talk at the James Joyce Centre last week, Vincent was assured a rapt audience.

Much of the evidence is circumstantial. As such, it comes with the warning that Ulysses is so full of cryptic detail that you can read almost anything into it. But that said, the Saltman ticks an extraordinarily high number of boxes that would have put him in Joyce’s frame of reference.

He was Jewish, crucially. He spent years living at 11 Usher’s Island, a few doors from where Joyce set The Dead in homage to his aunts at No 15.

Albert’s brother Mendel, meanwhile, had a habit of living next to addresses that turn up in Ulysses, and once also shared a house with Joe Hynes, who featured in both Ulysses and the Dubliners story, Ivy Day in the Committee Rooms.

Then there is Albert’s daughter, “Mimi”, a singer with whom, according to Altman lore, Joyce was once smitten. She sang at the same Sandymount church where Joyce was once invited to be tenor. And her real-life cousins, Mendel’s daughters, were Cissie and Edy, the same as the girls Bloom sees on Sandymount strand.

Albert’s nationalist politics also fit with those of Bloom, who in the book is said to have given Arthur Griffith the idea for Sinn Féin.

But even some of Joyce’s jokes are pointed. Among the Altmans’ other causes was the temperance moment, in which one of their comrades was a Dignam, as was Paddy Dignam, the drunkard famously buried in Ulysses.

And it is in death that some of the most persuasive parallels occur. Thus Altman’s real-life father Moritz had taken his own life with poison, just as the fictional Bloom’s did. As for Albert’s death, by the time it happened he was living in Ballsbridge, so his funeral route must have been almost identical to the one Joyce gave Dignam, from Sandymount.

Then we come to Altman’s grave in Glasnevin, only metres from that of Matthew Kane, Dignam’s model. Albert is buried with his wife Susan, their daughter Mimi, and a son Bertie who died in infancy. In the book, Leopold and Molly Bloom had a son Rudi, also dead in infancy, and a daughter Milly. The Blooms’ fictional grave would be uncannily similar to the Altmans’ real one.

But why, if Altman was his inspiration, should Joyce have so carefully covered the tracks, allowing for scholarly consensus that Bloom had no Irish antecedents, but was instead a composite of the writer’s Jewish friends in Trieste?

The answer may be libel. As a book so rooted in the real Dublin of 1904, Ulysses had given hostages to legal fortune. Bloom’s real and imagined sex life, for example, might have been considered damaging even to the reputation of descendants.

As late as the 1960s a family friend, John D Sheridan – himself a writer but also a conservative Catholic – urged Emmanuel Altman, Albert’s nephew, to read the novel and take legal advice. This followed a case in which one Ruben J Dodd won damages arising from a BBC broadcast of Ulysses.

But Emmanuel Altman did not take the bait. As Vincent (his grandson) puts it, he had no interest, legal or otherwise, in Joyce’s “smutty book”.