Government’s policy on human rights act must be seen for what it is: political posturing 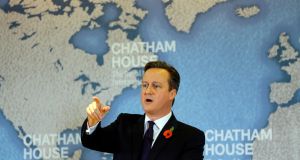 The Human Rights Act already makes it clear that UK courts are not bound by judgments of the European Court of Human Rights. Photograph: Kirsty Wigglesworth/Pool/Getty Images

The debate in the United Kingdom about the Conservatives’ plans to repeal the Human Rights Act, which incorporates the European Convention on Human Rights, has, over the last few weeks, taken an unusual and somewhat perplexing twist.

Not only is the British Government pushing ahead with plans to scrap the legislation, but, despite bewilderment amongst its opponents, it is planning to “fast-track” the repeal into law before the end of next summer.

The Conservatives want to replace the Human Rights Act with a “British Bill of Rights”, the draft text of which they have not yet published and one suspects, they still can’t quite agree on.

While some of the proposals canvassed are more tentative and cosmetic than many expected, at the core remains, it seems, David Cameron’s pre-election promise to limit the extent to which Britain has to follow the decisions of the European Court of Human Rights in Strasbourg.

The British government’s policy must be seen for what it is: political posturing. The Human Rights Act already makes it clear that UK courts are not bound by judgments of the European Court of Human Rights.

They are only required to “take account” of them - and indeed- there have been examples, particularly recently where the Supreme Court has decided not to follow decisions of the Strasbourg court.

The reaction is disproportionate, too, given the number of cases that London has lost: just 0.07 per cent of cases have resulted in a finding that it has done something wrong: the overwhelming majority of cases fail.

Furthermore, the UK has only lost in Strasbourg when it should have done so, in cases where it clearly violated a Convention that it signed up to abide to, in judgments that were fair and reasonable.

The driving force behind the disdain for the Human Rights Act- and the Strasbourg Court – is part of the United Kingdom’s wider problem with its relationship with Europe.

In reality, its repeal will do little for “British sovereignty”.

Likewise, the notion that new legislation is needed to enshrine the principle of “parliamentary sovereignty” is a complete misnomer. This ancient principle is already well established in law and already protected in the Human Rights Act.

And what of the Union of the United Kingdom all recent British Governments have been so keen to maintain? The Human Rights Act has widespread support in Wales, Scotland and Northern Ireland.

Proposals to repeal it are likely to serve only to further fracture a reeling Union.

The Human Rights Act forms a constitutional bedrock of devolution in Scotland and the Scottish Government have made it clear they will not support repeal.

For Ireland, the Conservatives moves are also serious since the Human Rights Act is a core component of the Belfast Agreement that was signed in 1998, coming into force just a few months after the agreement on Good Friday.

The text of the agreement powerfully mandates London to incorporate the Convention on Human Rights into domestic law clearly providing for direct access to the courts, and effective remedies for breaches, including, powers for the courts to overrule legislation of the Northern Irish Assembly.

In a quid pro quo, the Irish Government in 2003 introduced the ECHR Act in 2003, very closely modelled on the UK Human Rights Act, designed to ensure largely uniform human rights protections on the island of Ireland.

preserve of an elite, they should recall that it was in a fact a crucial component of a peace accord voted for overwhelming in referendums in both parts of the island.

In fact, in the years since 1998 the Northern Ireland Human Rights Commission has tried to build on protections in the Human Rights Act , not to water down or replace them. The Act itself has become deeply embedded in NI’s laws and is used regularly by judges, lawyers, local government and ordinary people in their day to day lives.

Earlier this year, Minister for Foreign Affairs, Charlie Flanagan told the Seanad that the Human Rights Act predicated on the European Convention “is one of the key principles underpinning the Agreement.”

The Irish Government has taken a clear stance on Britain’s proposed exit from the European Union. It is to be hoped that it will take an equally clear attitude on the Human Rights Act now that previously speculative plans to repeal the act are starting to take shape.

Britain finds itself in the unusual, and unedifying position of being the only country in the world to propose to repeal existing human rights protections with the aim, it says, of introducing a domestic bill of rights.

Every other country who has sought to introduce a bill of rights has done so by building on existing rights protections – not repealing or re-trenching them.

Attempting to draft a new constitutional document in the middle of a highly charged political debate about Britain’s EU relationship and on a truncated timetable is misconceived.

It is also legally completely unnecessary.

Gráinne Mellon is a barrister in Garden Court Chambers in London and a guest lecturer in International Human Rights Law at the London School of Economics.