Breda O’Brien: Women tell me their stories about abortion all the time 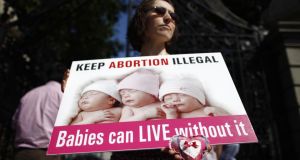 A demonstration outside the Dáil in 2013 ahead of a vote to introduce abortion in limited cases where the mother’s life is at risk. Photograph: PETER MUHLY/AFP/Getty Images

We are being told that Irish women do not talk about having abortions. That’s not true.

They don’t generally publish their experiences in newspapers, or talk about having an abortion in a blasé way, but they talk.

Women tell me stories all the time, sometimes about their friends, sometimes their own story. Women have told me of going for post-abortion counselling to a pro-choice organisation, only to be told, “You did what was right for you at the time. Put it behind you and move on.”

These women are not listened to. They feel dismissed and diminished.

Some reading this will immediately blame their distress on patriarchal attitudes, and guilt imposed by a repressive church.

Why should anyone feel guilt, or grief about a common medical operation?

Perhaps because it is a common medical operation that ends your own child’s life.

You can argue about personhood before birth, but you cannot argue about humanity. The only basis that the UN Declaration of Human Rights framers could agree on, was that human beings have rights simply because they are human.

An old cartoon resurfaced during this migrant crisis. A coastguard hails a small boat packed with migrants, asking “Where are you from?” The response is “Earth”. The point is that ethnic, political and religious differences cannot obscure our common humanity.

Except for some ideologies, which very emphatically declare that common humanity is not enough to ensure a right to life.

Instead of demanding that the world change to accommodate the fact that women have babies, it decided that women could never be equal until they could be as free from the burdens of pregnancy as men have always been.

So the now-dominant form of feminism made an exception to its non-violent creed, and decided that ending life is not really killing if it is carried out by medical personnel. Feminists who were anti-abortion were shunned.

The first step in denying rights is to dehumanise the victim. So began a systematic campaign talking about blobs of cells, and foetuses, and the right to choose. In Roman times, a child’s right to life depended on her father choosing whether she could live or not. We call that an abuse of patriarchal power. But in the pro-choice worldview, a woman can only make a morally correct choice, no matter what it is. I try not to judge individuals, and nothing here is directed at any individual woman.

It is directed at a worldview that sees the criteria for whether a choice is right or wrong beginning and ending at your own needs. It is directed at a movement that calls itself left-wing, but decides not to champion the underdog, the one completely without a voice, the one who, as a result. will never, ever be heard.

Pro-choice ideology ignores the fact that some choices will deprive another human being of the chance to grow and develop so that they, too, can exercise choice. If I had become pregnant as a teenager, I am not sure what I would have done. So I empathise with women in crisis pregnancies, and don’t want to add to their burdens. But that is not the same as saying all choices are equally good. Some choices are wrong.

Apparently, harm only counts if a child is “chosen”. But the value of a child does not depend on being chosen by her parent, any more than the value of Aylan Kurdi, the recently drowned three-year-old Syrian refugee, lay in whether a country chose to give his family asylum.

Of course some women do not regret their decision. But in what other serious moral dilemma do we judge the rightness or wrongness of an act by whether someone regrets it or not?

Some women regret abortion with indescribable pain that resurfaces at every anniversary of the abortion and of the due date, at every milestone their child will never pass. The women who are devastated by abortion are met with a callous, “That may be true for you, but you can’t impose your views on others.”

Yet there is no problem with imposing a choice to end someone’s life.

Those who advocate listening to women never want to listen to that reality.

If they did, it might cause them to question their sincerely held, but profoundly wrong belief that ending the life of a member of the next generation is morally equivalent to the extraction of a wisdom tooth.

4 ‘He strangled me to the point where I couldn’t breathe, I couldn’t scream’