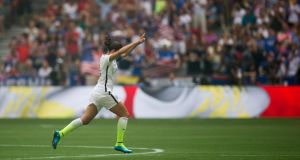 With all the fuss about the English FA lashing out inappropriate tweets about their women footballers, then deleting them quicker than you can say “make me a cup of tea, love, I’m parched”, is the good being sucked out of the beautiful game?

Just to recap, the FA’s charming tweet welcoming Women’s World Cup bronze medal winners the Lionesses home, read: “Our #Lionesses go back to being mothers, partners and daughters today, but they have taken on another title – heroes.”

England’s women players may be returning to cooking and bottle-washing, but at least they will now do so “heroically”, according to the lads in the English FA.

It’s been a funny old week for sporting women.

The Dane would love to play “on a big court,” she said.

“I think a lot of us women feel like we deserve to play on the big courts in front of a big crowd, as well.”

No one wants to see any beautiful game played by women do they?

The United States’ 5-2 victory over Japan in the Women’s World Cup final on Sunday was seen by 25.4 million viewers. This was a record for any soccer game, men’s or women’s, shown on English-language television in this country.

Yes. More people in the US watched the women’s World Cup Final than the men’s.

Critics of women’s soccer (women’s sport, in fact) say that it is a lesser beast.

However, it is a different beast - and there is room for both animals at the watering hole.

There will not be room for both animals if the GAA have their way, though.

Cork’s women’s football and camogie teams find themselves victim to an “extraordinary” fixture conflict this Saturday, according to their manager Eamonn Ryan.

As his side looks to win their 10th All-Ireland title in 11 seasons, they find that they must play Kerry in the Munster final in Mallow at 6pm.

Not a bother. Nice time too, I hear you say.

Not a bother, you might say, until you realise that at least three Cork players play for both teams. It is going to be a busy day for Briege Corkery. And that’s after she’s fed the cows.

Although Team Camogie and Team Football do have their differences, there is a significant overlap. Never mind the players, what about the spectators? Did anyone think about them?

After all it is bums on seats that everyone is seeking.

The United States women proved you could be dual winners on Sunday. A world cup victory wasn’t too shabby, but neither were those television viewing figures.

Anyone who watched any of the Women’s World Cup - and you should have - will tell you that it is not the same as the English Premiership or the Champion’s League.

The height of the goalkeepers is a case in point. The boys are just taller, making the lob (are you listening Ms Wozniacki?) a tastier prospect in the women’s game.

However the lobbed goal is not unique to the women’s game.

US world cup hat-trick hero Carli Lloyd’s spectacular goal, despatched from behind the halfway line, was a “shut-up” moment.

Anyone who recalls Nayim’s winning goal for Zaragoza in the 1995 Cup Winners Cup, when he lobbed Arsenal’s David Seaman, is both getting on a bit, and in touch with their feminine side, because there was a similar skill level involved in both goals.

Nayim’s goal has been joined in the memory bank by Lloyd’s goal. It wouldn’t have joined it if no one had seen it.

Luckily 56 million people in north America saw it - and many more across the globe.

Yes, women’s soccer is different. But, no, it is not equal.

3 What will €8.9m buy in Dublin, Switzerland, France, Spain and London?

5 Lives Lost to Covid-19: Tommy Cawley, the bull man of Bellmullet and a winning jiver