As the 1916 centenary dawns, we should focus on what unites us all, not what divides us 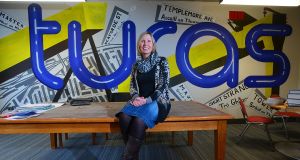 Linda Ervine, who was responsible for bringing the Irish language in to loyalist east Belfast: “As long as it’s used as a weapon, the language has no future. But as a bridge it has a bright future.” Photograph: Arthur Allison

The most impressive politician I met in 2015 was Julie-Anne Corr Johnston, a 28-year-old member of Belfast City Council, representing the small left-of-centre Progressive Unionist Party (PUP), many of whose members are former UVF prisoners. Corr Johnston is a lesbian and gay activist.

At a talk in Dublin in December, she spoke movingly about growing up in north Belfast, about self-harming as a teenager as she felt different and excluded and about “coming out” and marrying her partner.

She also spoke about how her initiation into politics had come through the Belfast union flag protest three years ago, when PUP leader Billy Hutchinson saw her at a demonstration and persuaded her that politics was about a lot more than flags.

Here is a young woman who personifies all that is good in politics these days: idealistic, radical, working to correct the injustices of poor health, housing and education among her working-class constituents and fighting for the rights of LGBT people. In this she is no different from thousands of young people who campaigned for marriage equality in the Republic of Ireland last spring.

However, there is one thing that marks her out from those young Irish people: she is a passionate Ulster unionist. She told the audience in Liberty Hall: “When the flag came down from Belfast City Hall, I felt my identity and sense of belonging as a British person were under attack. I feel British; that’s who I am, that’s how I was brought up, I don’t know anything else; I identify strongly with Britain as an inclusive, progressive, multifaith and multicultural society.”

What are my republican and anti-partitionist friends going to do about this impressive woman and people like her? She goes against the handy (and handed-down) nationalist stereotype that all unionists are right-wing, bigoted and intransigent, and so the best thing to do is to go over their heads and get their British masters to “persuade” them into an all-Ireland republic.

The alternative is much slower and more difficult and may not even work. It is to find common ground with nationalists that may – just may – persuade them that they have something they can share with the other people on this island.

Here we can learn here from the Germans, French and Dutch, who after the second World War set about the slow, painstaking work of building peace and mutual understanding between peoples who had experienced the horrors of war and occupation to a degree that is almost unthinkable to the self-obsessed Irish, ignorant as we too often are of comparable situations in other regions.

For example, I have listened to several speakers from the Dutch-German border region explaining the 60-year process, beginning in the 1950s, that led to it becoming the prototype for successful cross-border cooperation in the EU.

They all emphasised that the first way people divided by war and bloodshed can start coming together is through “people- to-people” cultural and artistic activities. When the people of that region started to work to heal the wounds caused by conflict, they began with exchanges in music, sport, the arts and education.

One Dutch leader said this very long-term process needed to be continually renewed, with each new generation being “made aware of its neighbours’ needs all over again” and taught how to overcome psychological barriers and prejudices.

This process was beginning to happen across the Irish Border in the early 2000s (helped by significant EU funding), but has dwindled to a trickle in recent years.

Could the Irish language play a role here? Another speaker at Liberty Hall was Linda Ervine (sister-in-law of the late David Ervine), who told the extraordinary story of how she had led the development of Irish in loyalist east Belfast.

There are now several hundred people learning the language in that unlikely quarter – usually known for its fierce antagonism to anything Irish – who are comforted by the thought that the Celtic languages are spoken in Scotland and Wales as well as Ireland, so Irish can be a unifying rather than a dividing element in these islands. As Ervine said: “As long as it’s used as a weapon, the language has no future. But as a bridge it has a bright future.”

The arts is another area where high barriers put up by centuries of bad, divisive politics can be overcome so that ordinary people start seeing those divisions differently.

A third speaker, author and historian Philip Orr, recalled a play of his on the Ulster Covenant in front of an enthusiastic audience containing everyone from dissident republicans to Orangemen in the deeply polarised town of Lurgan. “Theatre gives people a licence to listen to the unlistenable,” he said.

However, this kind of cultural change is a very long-drawn out business: changing mindsets forged over several centuries of fear and conflict will take something like the same time to put right. Nothing is going to happen quickly.

That wise person Mary Robinson said in a BBC interview three years ago that a united Ireland “doesn’t need to be on the agenda” and “isn’t relevant in the context of what is happening on the island now”.

I would suggest it will take the best part of another century (if then) for the kind of necessary trust to build up through healing inter-personal and cultural interchange in order to begin to re-consider unity as a serious item on the political agenda.

It would be most refreshing – although extremely unlikely – if such a message were to go out from at least some political and civic leaders of this republic on the eve of the centenary of the foundational event of our national independence movement.