An Irishwoman’s Diary on Samuel Beckett and friendship 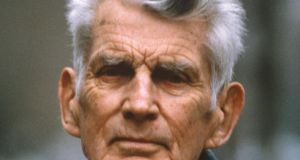 John Minihan’s portrait of Samuel Beckett from the cover of André Bernold’s ‘Beckett, A Friendship’, translated by Max McGuinness

When Samuel Beckett taught English as a lecteur at the prestigious École normale supérieure in the 1920s, he spent much of his time drinking and sleeping until noon.

Unlike Beckett, McGuinness worked very hard, poring over archives in the Bibliothèque nationale for his thesis on literary modernism and the press in late 19th and early 20th century France.

McGuinness also found time to translate Beckett’s Friendship, a bijou of a book originally published in French in 1992 and recently revived by Lilliput Press in Dublin. Beckett’s Friendship is a short, philosophical contemplation of the last 10 years of Beckett’s life, as witnessed by André Bernold.

Bernold met Beckett by chance, in front of the gates of “Normale sup”, where he too studied. They sat down together three months later.

“It lasts exactly one hour in near total silence,” Bernold writes. “I don’t remember a single word. We sat opposite each other, royally mute. I believe I remember that we were hunched forward a bit, so as to examine the deep breathing of this silence.”

Now McGuinness (29) and Bernold (57) have also become friends, talking for hours on the telephone about Beckett. McGuinness describes Bernold as “a very warm and eccentric, brilliant individual” who “sends me long letters written in purple ink about the saga of the book”.

“Beckett loved Paris”, Bernold wrote. “He loved that people walked there, like him . . . We used to compare notes. He introduced me to little corners, pointed out myriad details, showing me new ways to weave through the streets.”

Beckett wrote much of his oeuvre in French, and would doubtless have agreed with McGuinness, who says his love of Paris is rooted in an attachment to French language and literature. “Paris is probably a better place to live in than to visit,” McGuinness says. “The city is like a very sophisticated woman who doesn’t reveal her secrets until you know her well.”

Bernold noticed Beckett’s Irish accent the first time they spoke in a Paris street. The Nobel laureate “never lost his Irishness”, McGuinness says. “Even when he wrote in French, there’s an Irish lilt to it. There are a lot of Irish names in the trilogy [Molloy, Malone Dies, The Unnameable]”.

As its title implies, the book is a reflection on friendship. “Unlike romantic or familial attachments, friendship has no obvious raison d’être,” McGuinness writes in the preface. “There is nothing necessary about a friendship.”

Most of Beckett’s second World War-era friends had died by the time he met Bernold, 52 years his junior. Their attachment “didn’t make sense in objective terms, because of the age difference”, McGuinness says. “They didn’t have much in common. There was something Chaplinesque about the way they played with their eyeglasses, the long silences . . . Beckett was childless; there’s a father-son or even grandfather-grandson dynamic.”

Beckett frets over whether Bernold’s flat is warm enough, whether he has a good coat. They talk about German literature, but also about the bird’s nest in Beckett’s country letterbox and the enjoyment of tossing chestnuts.

Bernold wrote superb descriptions of Beckett’s voice and handwriting, his wrinkled face, “ligneous hands”, and unravelling jumpers. We watch Beckett solve a problem in a Paris café, “leaning on his elbows, smoking in silence, and raising his eyes every now and then . . . insouciant of scattering ash onto the marble table, his cup of coffee, and the burnmark-pocked sleeves of his inevitable brown jacket, scrawling on the back of the packet of cigars, going over and over the sketch or the diagram”.

McGuinness believes Beckett’s “numerous pithy quips, infused with a distinctive Franco-Dublin irony” may be the greatest gift of Bernold’s text. They include “I’ll be there if they need obscurement”, “All my life, I’ve been banging on the same nail”, “Put a bit of order in my confusion”, and “getting down to insomnia”.

“There’s a real sense of Beckett not quite talking as he wrote, but talking in a way quite close to some of his characters,” McGuinness says.

Bernold calls Beckett’s characters his “creatures”. Though he constantly read Beckett’s work, he didn’t talk about it, “For I saw in him another man altogether from the one who had inspired them.”

Beckett had a similar sense of detachment. “He’s become foreign to me, this author. I can’t bring myself to believe in it,” he told Bernold in 1984.