An Irishman’s Diary about gender-neutral pronouns 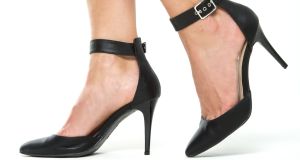 The feature in question concerned the sexual politics of high heels

Here at the Society for the Preservation of Gender-specific Third Person Singular Pronouns (SPGsTPSP), we are not opposed to progress. On the contrary, we are also active participants in the search for English grammar’s holy grail, the gender-neutral alternative. But anyone who thinks the problem has been solved by the use of “they” and “their”, and that those of us who resist this solution are “number-agreement Nazis”, might consider the embarrassing situation we found ourselves in on page 11 of the Health supplement on Tuesday.

In case you missed it, the feature in question concerned the sexual politics of high heels. And very entertaining it was too, when you got into it.

Unfortunately, entrance to the text was via the vestibule of what journalists call a “standfirst”, which referred to a survey mentioned in the article, and read as follows: “The average time it took a man to approach a woman in a bar directly related to the height of their heel.”

Now maybe there’s something wrong with me, reader, but my initial interpretation of that sentence was that the “their” referred to the man.  After all, the subject appeared to be one of motion studies –   how his heels would affect the man’s rate of progress when approaching the woman across said bar.

Why he would be wearing high heels was not my business (although I presumed the article would explain). People do all sorts of things in surveys, I reasoned.

Of course, it may also be that I’m unusually broad-minded about matters of footwear and gender. If so, I credit the influence of Van Morrison, who liberated my opinions at an impressionable age with his famous song intro about the “clicking-clacking of the high-heel shoe/Ford and Fitzroy/Madame George”.

So you can imagine my discomfiture when, several paragraphs later, I realised it was the woman in the standfirst who was wearing the heels. And that, far from concerning pedestrian mechanics, the story was about the increased velocity with which some men will cross a bar when they see a woman so attired.

At which point, as well as being depressed at the Pavlovian response of so many less-enlightened members of my gender, I had to go back and apologise to the guy in the standfirst for making unfounded presumptions. Talk about awkward.

This could all have been avoided by the use of “her” instead of “their”. And the irony is that, in seeking to avoid the gender-biased pronoun, the subeditor instead required the reader to conspire in an unspoken act of binary gender stereotyping, which, as we’ve established, was quite beyond me. But I’m not blaming him or her (or if you insist “them”), because such is the sensitivity about gender-specific pronouns now that there is a tendency to avoid them altogether, even in situations where they remain indispensable to meaning.

The real culprit, as always, is the English language and its scandalous failure, over centuries, to devise a neutral pronoun. You might think this a relatively modern problem.  It’s not. Consider a letter written to the Atlantic magazine in 1878, by the magnificently named US philanthropist Napoleon Bonaparte Brown. “The need of a personal pronoun of the singular number and common gender is so desperate, urgent, imperative, that according to the established theories, it should long since have grown on our speech, as the tails grew off the monkeys,” he wrote then.

But 137 years later, the evolutionary process of which he despaired still hasn’t given us anything better than “them” and “their”, which were also used in Brown’s era, with equal unease.

Hence the attempt by one of his contemporaries, lawyer and hymn writer (a nice phonetic joke there, by the way) Charles Converse, who proposed “thon” as the neutral pronoun, and managed to get it into some dictionaries until that too, like all attempts to solve the problem through linguistic engineering, was discarded.

I quite like “thon”, partly because it already exists here in Ulster-Scots, meaning “that yonder”.  But in Converse’s case, it was supposed to be a contraction of “that” and “one”. As such, it would fail the gender-neutrality test in Ireland.

For mysterious reasons, the word “one” , when referring to a person, is almost always used here about – and more often than not by – the female gender. Imagine, for example, a woman wearing eight-inch heels. Then imagine another woman watching her and commenting “Would you look at that one?” and you’ll know what I mean.