‘Often these are women who are not dependent on alcohol, but are in the habit of regularly drinking. They buy wine and other alcohol as part of the weekly shop’ 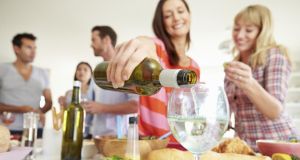 It is sobering for anyone to hear that they have liver damage or cirrhosis which can often show no symptoms until it is fairly advanced. Twenty years ago, this was a disease that affected men in their 50s and 60s. Now, 40 per cent of my patients with cirrhosis are women who are facing serious health challenges. Many are mothers of young children.

“If only I had known” is something they frequently say, when I explain their liver is damaged as a result of their consumption of alcohol. They genuinely had no idea they were drinking alcohol in the quantities that could contribute to serious health issues or even death in their 30s or 40s or older. It is difficult to see young mothers faced with potentially fatal liver damage and a short time to live make arrangements for their children. Often these are women who are not dependent on alcohol, but are in the habit of regularly drinking. They buy wine and other alcohol as part of the weekly shop.

The widescale availability of cheap alcohol has significantly contributed to the fact that we now consume twice as much as we did 50 years ago. Research shows about 80 per cent of Irish adults consume alcohol, and more than half of those are classified as harmful drinkers. About 10 per cent of these drinkers are dependent – and this rises to 15 per cent among 18 to 24 year olds.

We are seeing a doubling in the number of deaths from cirrhosis. Alcohol is also one of the leading causes of cancer, particularly of the breast, in women.

Most people think a glass of wine is one unit but a unit is 125ml – about “an egg cup” compared to the “goldfish bowls” some people pour. They also think a unit is a pint, when it is two units or more if it cider or strong beer.

I don’t think people are intentionally trying to ignore advice around safe levels of alcohol consumption – they just don’t realise how much they are drinking. As a society, we tolerate drunkenness and excessive drinking even though it is a contributory factor in many suicides, road deaths and violence.

As more women of all ages are now drinking alcohol we don’t know the scale of potential damage to their health. We don’t know what effect binge drinking in your teens will have in later life.

A recent study carried out on 101 first-year students in UCC found that 96 per cent drank alcohol, spending about €20 per week. On an average night out, females drank as much as males. Only 9 per cent said knowing the health consequences would affect their intake. The largest group (36 per cent) said they would be influenced by the cost of alcohol or participation in sport (29 per cent).

In general I find people are very honest about their drinking. They may be in shock or denial, but some will say they have no intention of stopping drinking. They see it as part of their social scene.

The Public Health (Alcohol) Bill 2015 contains many evidence-based initiatives that can save lives and alter the way we consume alcohol. Controlling the price of alcohol and restricting its availability is key to addressing our national crisis with alcohol and should be supported. The merits of these measures will be highlighted during events on Action on Alcohol Week which runs from today until April 26th.

The introduction of a minimum unit price for alcohol has been shown to immediately reduce the number of people attending hospitals as a result of excessive drinking. Clear information carried on labels to identify the contents of alcohol products should also help to better inform us about the potential health harms caused by alcohol consumption. The separation of alcohol from everyday groceries is also essential in helping to change our drinking habits.

Dr Orla Crosbie is a consultant hepatologist at Cork University Hospital and a fellow of the Royal College of Physicians of Ireland. She will be speaking at the Alcohol Action Ireland conference on Girls, Women and Alcohol: The Changing Nature of Female Alcohol Consumption in Ireland tomorrow in the Westin Hotel, Dublin, 10.30am-4pm