‘Sometimes, in the interests of truth, it is important to stand your ground’ 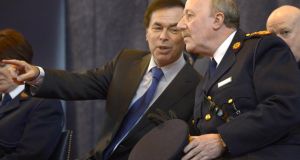 The Fennelly commission inquiry was confronted by conflicting accounts of what occurred immediately preceding the premature retirement of former Garda commissioner Martin Callinan on March 25th, 2014.

The commission engaged in a painstaking approach to unravelling and documenting what had occurred. The inquiry was conducted impeccably and is beyond reproach. Everything was done to ensure fair procedures were applied, all records and papers of relevance examined, all relevant parties appropriately engaged, their testimony obtained and vigorously questioned. Everyone concerned was given an opportunity to reflect on the draft report and conclusions reached and opportunity to comment. The report fully and transparently details the steps taken by the inquiry. The manner in which the commission undertook its work is a model of how to conduct a statutory inquiry.

The Fennelly interim report speaks for itself. I do not believe it requires from me any interpretation. I believe it is right that those outside the events detailed in the report make their own judgment on it.

From a personal perspective, of course, I welcome the commission’s finding that, prior to the then commissioner’s premature retirement I neither received nor had any knowledge of the letter of March 10th, 2014, on the “Garda taping issue” furnished by the then commissioner to Brian Purcell, then secretary general of the Department of Justice.

I also welcome the finding that it was not until the evening of March 24th, 2014, that I was first properly briefed on the discovery of tapes in various Garda stations and of An Garda Síochána taping of phone conversations for many years. Each of these findings discredits allegations to which I was subjected both by Opposition TDs and some commentators of my being untruthful about these matters.

This is not the first report published since my resignation from the Government determining that political allegations made during the unprecedented series of Garda controversies in the period from January to March 2014 were untrue.

In early February 2014 it was alleged that An Garda Síochána had put the Garda Síochána Ombudsman Commission (GSOC) under surveillance, that I was covering up this “fact” and guilty of misleading the Dáil about GSOC’s obligation to inform me of the investigation it had undertaken. Mr Justice Cooke conducted an inquiry into what became known as the “GSOC bugging scandal”, a term coined under the assumption that GSOC had been under surveillance.

While the Cooke inquiry, unlike Fennelly, was non-statutory, it also fully and properly complied with fair procedures, examined all relevant records and papers, engaged with all parties and gave them an opportunity to comment on preliminary conclusions. It was a model of how to conduct a non-statutory inquiry.

The Cooke report, published about six weeks after my resignation, confirmed I told the truth about the GSOC issue, concluded that GSOC had not been under surveillance and that there was no evidence of the Garda engaging in surveillance of the commission. Despite that, the “GSOC bugging scandal” resurfaced this week in discussions on the Fennelly report as if the Cooke report had never existed.

In mid-January 2014, the long-standing penalty points controversy was revived at a meeting of the Dáil Public Accounts Committee (PAC) with new allegations made of Garda misconduct and an unfortunate comment by the then Garda commissioner.

To this day, the standing narrative is that I failed to properly address this issue. That is completely untrue. Initially it was addressed in both the O’Mahony report and a report of the Garda professional standards unit and substantial reforms implemented. Because of my reservations about the O’Mahony report, I had the matter addressed by the independent Garda Síochána Inspectorate, which reported in March 2014.

I then made immediate arrangements to ensure full implementation of the inspectorate’s recommendations. GSOC was also asked by me to conduct its own investigation following the January PAC meeting.

Despite the action taken by me, the narrative remains that I failed to take the issue seriously. This is partly because I did not stridently and repeatedly criticise Garda failures in public. I did, in fact, voice some concerns on publication of the O’Mahony report. Had I no concerns at that time there would have been no reason to refer the issue to the Garda inspectorate. However, I understood that, daily, in the fight against crime, subversion and terrorism, members of An Garda Síochána place their lives on the line and that it was important that I was publicly supportive of the force. This did not involve or require that allegations of misconduct or Garda incompetence be ignored. There is ample opportunity for a minister for justice to communicate such concerns to the Garda commissioner directly or through departmental officials and request or require that issues be addressed. It does not require the use of a public megaphone.

Both the Fennelly and the Cooke reports are of relevance to how we conduct politics in this State and to considering what sort of country we want. They have irrefutably established that serious charges and accusations made, both inside and outside the Dáil, were untrue but this has not to date been acknowledged by a single Opposition deputy.

Politicians on all sides have learned that dramatic and exaggerated presentation, street demonstrations and accusations are more likely to attract public notice and media attention than careful and reasoned argument. When it comes to media coverage, confrontation is king and accusations of dishonesty or corruption are seen as legitimate weapons in the battle to attract public support without it being perceived that there is an obligation to ensure that reliable evidence exists before allegations are made.

A coarseness and nastiness is now a daily part of our political discourse, fuelled by opportunistic political partisanship. It is all designed to appeal to people’s emotions and not their reason. It is ironically represented by some to be a new desirable form of politics when in reality it is little short of demagoguery and is very old politics masquerading as new.

One of the lessons to be learned from both Fennelly and Cooke is that, in the absence of substantive evidence, neither members of the opposition nor of government should rush to judgment when addressing an issue of concern. It is also important that those with the responsibility of government do not have their judgment clouded simply because of the existence of controversy. In the absence of crucial information, action should never be taken or decisions made solely for the objective of avoiding or ending controversy. Sometimes, in the interests of truth, it is important to stand your ground.

Alan Shatter TD is a former minister for justice