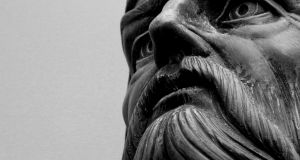 In terms of news stories, the theft last year of the statue of the Celtic sea god Manannán mac Lir ranks as one of the most bizarre. Toward the end of January 2015 a gang stole the tall steel and fibreglass statue, which was erected near the Co Derry coast as part of a myths and legends sculpture trail. Mystery surrounded its disappearance but it was believed to have been linked to Christian fundamentalists offended by Celtic idolatry.

The thieves used an angle grinder to cut it off from a small boat, leaving behind a wooden cross carved with the words “You shall have no other gods before me.”

Manannán was depicted with a belted dress and long robe, while by his side, his sword or fragarach, could cut through any armour. At sea, his horse, Enbarr of the Flowing Mane, which pulled his Wavesweeper chariot, could gallop over water as though it were solid land.

In mythology, a divine lord of the Tuatha Dé Danann, Manannán was affiliated with Tir na nÓg and a fearsome figure who borrowed iconography from Neptune. Local people living near Lough Foyle believe his spirit is released during fierce storms and some are still heard to remark “Manannán is angry today”. He is said to inhabit the offshore sandbanks between Inishtrahull Sound and Magilligan waters.

For my meandering journey last year along the Wild Atlantic Way, the sea god became a leitmotif. As I made my way by car, bike and ferry, on foot and on horseback, he was an emblematic figure. All along the west coast, connections cropped up as developments in the story of the statue’s disappearance unfolded in tandem with my trip; these included a large-scale search for him, a police appeal – tongue firmly in cheek – for information on a missing “person”, and a reward for his safe return. A Facebook page quickly built up a fan base. More than a month after the theft, the statue was found, unceremoniously dumped in a forest, hardly a comfortable love-bed for a powerful sea god.

In Mayo he is linked to Inishglora through his connection as a half-brother of the Children of Lir. Four holes of Carne Golf Club are named Conn, Fiachra, Aodh and Fionnuala in their honour, while near Benwee Head a Children of Lir loop walk has been created. In the same county, a few miles inland, at the Mall in Castlebar, Manannán is remembered in another statue, this one dedicated to Ernie O’Malley.

Next door, in Galway, the “Kingdom of Manannán” recalls his association with Connemara. Historians believe that Mannin Bay is named after him and he is thought to be an ancestor of the Conmhaícne Mara, the people for whom Connemara is named. On stormy days, foamy waves known as his seahorses, caiple Mhanannáin, can be seen. Folklore says that one day Manannán’s daughter was caught in a storm while boating in Kilkieran Bay, but he saw the danger she was in and rescued her by conjuring up Mann Island, a small rock in the bay.

When he wasn’t using his magical powers to produce rocks, he was a philanderer and opportunist who moved by the heavens. His legendary crane bag contained the treasures of the Tuatha, including knives, shields and shears, and whoever has these is said to be safe from his enemies.

Across the Shannon (the goddess of the river, Sionann or Sinann, was Manannán’s granddaughter) deep in southwest Munster, if you follow the road that curls around Ballycrovane harbour to a remote headland at Kilcatherine Point on the Beara peninsula, you will come upon the Hag of Beara, the Cailleach Bhéara. A wise woman or witch, and influential fertility goddess, she has metamorphosed from a human figure to a conglomerate erratic blotched with lichen and furred with moss. Decorated with offerings, ranging from money to jewellery, the Hag has become a shrine. From her commanding position, surrounded by a mosaic of wild flowers such as bog asphodel, thyme, hawkweed and wild angelica, she waits for her consort Manannán to come back to her.

Although he may never return to west Cork, he has now been restored to his rightful place at the other end of the country. On the north coast a strengthened statue is attracting the attention of the culturally curious to his mountain-top plinth at Binevenagh, and once more the sea god is in the pantheon. Manannán lives again, his place firmly reinstated as a swashbuckling figure in Irish mythology.

1 Chairman of Fáilte Ireland resigns after it emerged he is holidaying in Italy
2 Anne Doyle: ‘Depression? I know what it is, and it’s a b*tch’
3 36 hours on Northern Ireland’s Causeway Coast: ‘Everyone is having a wild time’
4 David McWilliams: It is time for a major property reset
5 Urgent report on Dublin eviction ordered by Deputy Garda Commissioner
Real news has value SUBSCRIBE