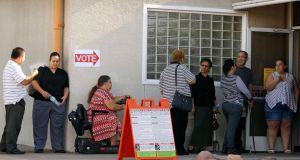 While Clinton got 65 per cent support among Hispanics, compared with 29 per cent for Trump, her support from this group was six points lower than Obama’s in 2012. Photograph: Ralph Freso/Getty Images

Democratic hopes that Hillary Clinton would easily defeat Donald Trump in the United States presidential election crumbled on Wednesday as the Republican candidate’s bombastic style appeared to win significant support among white, working-class and rural voters across the country.

Clinton’s loss seemed to result, in part, from a worse-than-expected showing among African-Americans and young voters – two important parts of the coalition that lifted Barack Obama to victories in 2008 and 2012.

• Black voters made up 12 per cent of the national electorate this year, nearly the same as in 2012. Clinton won a broad majority of black voters – 88 per cent, compared with 8 per cent for Trump. But Obama received 93 per cent of the African-American vote four years ago.

• Clinton also did slightly worse than Obama among young voters. People under 30 made up 19 per cent of this year’s electorate, the same as in 2012. Clinton got 54 per cent of their support, compared with Obama’s 60 per cent. Trump had the backing of 37 per cent of voters under 30, the same percentage that Mitt Romney won in 2012.

• Ninety-four per cent of black women voted for Clinton; among white Republican women, 91 per cent per cent voted for Trump.

• Among non-college-educated whites, 67 per cent voted for Trump, including 72 per cent of men and 62 per cent of women.

• In the key battleground of Florida, Trump built his support largely on voters who expressed deep dismay with Washington. Nearly nine in 10 of his voters in Florida said they were dissatisfied or angry with the state of the federal government. Just as many disapproved of Obama’s job performance, and three-quarters thought the president’s healthcare law went too far.

• Hispanic voters made up 11 per cent of voters nationwide in 2016, just one point higher than in 2012. While Clinton got 65 per cent support among Hispanics, compared with 29 per cent for Trump, her support from this group was 6 points lower than Obama’s in 2012.

• While Clinton did better than Trump among non-white voters in Florida, it was not enough to offset his success with white voters, who skew older in the state. He won those by nearly two to one, including those with a college degree. A quarter of Florida’s electorate was white and over 60. Trump pulled most of his support from the Gulf Coast and the central part of the state, a hub for wealthy retirees, offsetting Clinton’s gaping lead in the Miami and Orlando areas.

• In North Carolina, 30 per cent of voters were non-white, and Clinton won this group by a 62-point margin (79 per cent to 17 per cent). Trump, countering with a strong showing among whites, won the state.

• The suburban share of the North Carolina vote increased to 38 per cent, from 28 per cent in 2012, while the share of the rural vote decreased by 10 points, to 24 per cent. Trump won majorities in both groups. – (New York Times/Guardian service)