US president reaches out to people on visit to Cuba 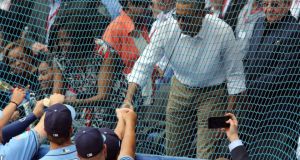 US president Barack Obama and Cuban president Raúl Castro at a baseball exhibition game between the Tampa Bay Rays and the Cuban national team, in Havana. Photograph: Alejandro Ernesto/EPA 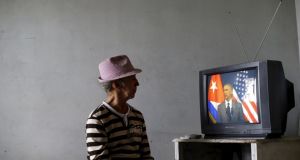 Barack Obama engaged in baseball diplomacy with Cuba in the final event of his ice-thawing visit to his communist neighbour.

The US president attended an exhibition game in Havana between the Tampa Bay Rays and the Cuban national team after delivering a legacy-shaping speech. His address to the people of Cuba punctuates one of the landmark foreign policy achievements of his presidency: the ending of a row that predates the 54-year-old president by two years.

If someone had dared to say 18 months ago that the world would witness Obama and president Raúl Castro standing shoulder-to-shoulder listening to The Star-Spangled Banner and chatting freely at a baseball game in Cuba, you would have responded that they were dreaming.

But yesterday Havana’s Estadio Latinoamericano – home to La Pelota, the national past-time the US and Cuba share – became a field of dreams. The sight of Obama being cheered by thousands of baseball-crazed Cuban fans was inconceivable before the decision of December 17th, 2014, to restore relations between the two countries.

The people extended their own hand to him at the baseball game, waving and smiling back at the president, who was casually dressed in a white shirt and sunglasses. He sat with Castro on one side, his wife Michelle and daughters Malia and Sasha on the other.

“In the culture of sports, we all unite,” said Camilo Rodriguez, a university professor who had arrived at the stadium with his wife and daughter four hours before the Castro-Obama baseball summit.

“We can’t put politics between the two teams. If we can unite in sport, we can always get united in politics.”

In Obama’s speech, which was televised live to the Cuban people, Obama said that Havana was only 90 miles (145km) from Florida but to reach here both countries “had to travel a great distance – over barriers of history and ideology, barriers of pain and separation”.

The president cast the history of the two countries against his own life: Fidel Castro seized power in a revolution in 1959, the same year his father came to the United States from Kenya. The US-backed Bay of Pigs invasion took place the year he was born. The following year, he said, “the world held its breath, watching our two countries, as humanity came as close as we ever have to the horror of nuclear war,” he said, describing US-Cuba conflict as “a constant”.

He characterised the nations as “brothers who’ve been estranged” and “shadow-boxers in this battle of geopolitics and personalities”.

“It is time now for us to leave the past behind,” he said. “It is time for us to look forward to the future together – un futuro de esperanza [a future of hope].”

The day did not pass without, from the Cuban perspective at least, a few curve balls. While imploring Cubans to empower themselves and to embrace change, Obama told them that the restoration of financial and trading ties required “the free and open exchange of ideas”.

“I believe citizens should be free to speak their mind without fear,” he said, to barely a smattering of applause in Havana’s national theatre.

After the speech, the president met Cuban dissidents at the US embassy who are subjected to that very treatment. He told them he wanted to ensure that “they have a voice” in the normalisation process.

“It requires many times great courage to be active in civil life here in Cuba,” Obama told them. “This is an area where we continue have deep differences” with the Cuban government.

At the game a few hours later, the Tampa Bay Rays batted first and in the first few throws, the American team’s first two batters were caught, the second one in spectacular fashion by an outfield Cuban player.

The athletic catch sent the boisterous crowd into ecstasy. “Cuba! Cuba!” they roared in approval.