US police neglect past civil disturbances at their peril 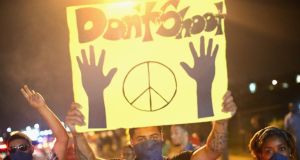 Demonstrators hold up a sign reflecting the protester chant of ‘Don’t shoot’ during a rally in Ferguson, Missouri, over the killing earlier this month of teenager Michael Brown. Despite the Brown family’s continued call for peaceful demonstrations, violent protests have erupted nearly every night in Ferguson since his death. Photograph: Scott Olson/Getty Images

Neglecting lessons of past civil disturbances such as the 1992 Rodney King riots in Los Angeles, police inflamed tensions that have fuelled more than a week of unrest in a St Louis suburb where unarmed black teenager Michael Brown was shot to death by an officer.

The challenges are as basic as the overwhelmingly white composition of the police department in predominately black Ferguson, Missouri, and a decision to quickly embrace aggressive tactics, current and former police commanders said.

While officials interviewed agreed that local authorities acted in a manner they thought best in difficult circumstances, they said inexperience, a chasm in relations between officers and the community, and disregard of lessons learned by larger police agencies appeared to make it harder to quell the strife.

“You have to know your community,” said Bert F Shirey, who in 38 years with the Baltimore police rose to deputy commissioner, second-highest on the force, retiring in 2002.

“You have to have real contacts in the community, and you always have to be careful to walk a fine line not to over-react. Sometimes a big show of force in the beginning may not be the proper way to deal with it.”

The use of tear gas during demonstrations in Seattle against the World Trade Organisation in 1999 was “the biggest mistake, the worst decision in my 34 years in law enforcement”, said Norm Stamper, the city’s police chief at the time.

The chemical, intended to clear a throng of non-violent protesters, provoked more violence in the days that followed, he said. “I learned what not to do, and I’m afraid it’s a lesson that has not been learned by American law enforcement,” Mr Stamper said in a telephone interview.

Protesters in Ferguson have hurled rocks and Molotov cocktails in repeated clashes with police since Mr Brown’s August 9th shooting, chanting “Hey hey, ho ho, these racist cops have got to go!”

Early yesterday, in scenes that recalled the civil rights movement of the 1960s, police fired tear gas and rubber bullets at about 200 protesters who refused to obey a midnight curfew set by Governor Jay Nixon.

Missouri State Highway Patrol Captain Ron Johnson, who was asked by Mr Nixon to oversee the police response, said the use of tear gas was appropriate because there were several armed people at a local restaurant, and one person had been shot.

Local authorities are referring reporter inquiries to the highway patrol.

The lessons learned by many big-city departments after episodes of urban unrest appear to have been lost on Ferguson police, said Jody Armour, a law professor at the University of Southern California in Los Angeles.

The Los Angeles Police Department, criticised for its response to the 1992 riots after a jury acquitted officers in the videotaped beating of Mr King, a black motorist, improved relations with non-white communities under a consent decree with the Justice Department, he said.

Ferguson police should have realised that a militaristic approach could backfire, Mr Armour said. “The armaments, the weaponry, the tone that was set with the citizens when you come in with a shock-and-awe approach to policing - when you’re surrounded by military armaments, the credo is more like ‘command and control’ than ‘serve and protect,’” he added.

“Experience matters. It taught the LAPD and a lot of other departments that it may be best to avoid those kinds of confrontations with citizenry, rather than fan the flames.”

A commission investigating the King beating found that police were perceived as an occupying army, not as members of the community, said Joanne Belknap, a University of Colorado sociologist who served on the panel.

Ferguson would have been wise to learn from that, she said.

The Missouri confrontations have fuelled questions about whether local police are over-equipped with military equipment and under-trained to deal with civil unrest. The conflict exposed a gap between a community that is 67 per cent black and a police force of 53 with three black officers.

“You are way behind the eight-ball when you don’t reflect the community,” said Kevin Davis, formerly a top police official in Prince George’s County, Maryland, where the racial majority is black.

When matters got out of hand, police should have responded with officers in their usual uniforms, not military-style equipment. A forum would have allowed the public to vent its anger.

Ferguson and St Louis County, which also responded to protests, “went from zero to 60 in 1.2 seconds”, Mr Davis said. “Once you roll that stuff out, you are in a fight. It’s hard to put that genie back in the bottle.”

Local police missteps may stem from lack of experience with such disturbances, said Peter Newsham, an assistant police chief in Washington, DC, where he said his department regularly faces protests and has learned from mistakes.

“Suiting up in riot gear and tossing tear gas is probably the worst way to deal with civil unrest,” Mr Newsham said. “You have to understand what kind of point the protesters want to make and allow them to be in public space. And you make it as safe as possible.”

He added: “There is a fear sometimes when you have large crowds, especially large crowds of people expressing anger over an issue, and traditionally law enforcement tries to suppress that to make it go away. That approach doesn’t work. We have learned that the hard way that.”