US Letter: Obama cherishing the words of a nation equally

US president finds a welcome modern application for 1916 Proclamation 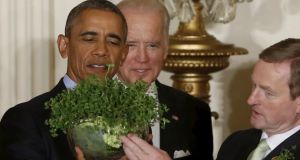 My history professor called them gobbets. They were short excerpts from momentous political speeches or texts to dissect: a what-they-said/ what-they-meant exercise to learn more about our complex history.

On Tuesday at the St Patrick’s Day shamrock ceremony in the White House, US president Barack Obama referred to the centenary of the 1916 Proclamation and remarked on being “struck with how ahead of its time” the document was, being built around religious and civil liberty, equal rights and “cherishing all the children of the nation equally”.

“Cherishing all the children of the nation equally: that’s a vision statement 100 years ago, and it would be a visionary statement today.

“It’s a universal value, like the ones in America’s own founding documents, that compels us to continually look forward,” he said.

The president went on to note how Ireland legalised same-sex marriage last year and how New York’s St Patrick’s Day parade was this week allowing an Irish LGBT group to participate for the first time.

There is an Obama-esque quality to the Proclamation’s unifying line, though his remarks will stick in the gullet of gobbet-munchers for applying a modern interpretation to a historical text. Scholars regularly note that the authors of the Proclamation wrote the line to signal their intent to put nationalists and unionists on the same footing in the independent Ireland they envisioned.

The much-used phrase has been often taken out of historical context to push for public support for various causes, from social equality to opportunity in education and, last year, for same-sex marriage.

Critics of this should not fret; regardless of their intent, the words have a welcome modern application, particularly coming from Obama at a time of such division and vitriol in US politics.

The rigid adherence to historical meanings of important texts has been the subject of renewed interest recently with the death of conservative US supreme court justice Antonin Scalia.

He was a vociferous proponent of “originalism” – the conservative legal credo that considers the US constitution to have a fixed meaning that cannot change even if the times and society that it governs do.

“The constitution that I interpret and apply is not living but dead, or as I prefer to call it, enduring,” Scalia once said, defining the concept.

“It means today not what current society, much less the court, thinks it ought to mean, but what it meant when it was adopted.”

It will be interesting to see how he interprets texts if confirmed. Scalia’s own static interpretations made an enemy of liberals, who saw him as a bulwark against a fast-changing society and the views of a majority of Americans.

There was some of that on display during the Manhattan St Patrick’s Day parade, with several Irish-American groups carrying “England get out of Ireland” banners.

Parts of Irish America appear stuck in 1975. They should have been carrying banners saying “Keep England in the EU”, given the more pressing economic risks Brexit poses to Ireland.

Dr John Lahey, the change-agent chairman of the parade, told me before the event on Thursday that he was “just thrilled” to have the first LGBT group in the parade but hoped that after a generation of division of inclusivity, the parade could return to its primary purpose: honouring the patron saint of Ireland and the archdiocese of New York, St Patrick.

“This issue has been a bit of a distraction from that focus over the last 25 years,” he said, standing at the famous cathedral named after the saint.

Viewing him in either a historical or contemporary context, Patrick, an outsider and immigrant to Ireland, stands as a symbol of the importance of inclusion. There could be no greater interpretation of Patrick’s life than to commemorate him by opening the parade to proud Irish people who had for years been excluded as outsiders.

De Blasio, noting the contribution of the Irish to New York City, referred to Annie Moore from Co Cork, the first immigrant to pass through Ellis Island.

Mitchell said in his speech that his Lebanese mother was one of the last.

“Let us, all of us, not forget where we came from,” said the peacemaker on the need to embrace newcomers of every background and heritage.

Now those are words to cherish.