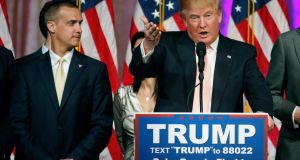 Florida police have charged Donald Trump’s campaign manager with misdemeanour battery in an incident with a reporter earlier this month.

Corey Lewandowski turned himself in to police, where he was issued with a notice to appear before a judge on May 4th.

In a second piece of bad news for Mr Trump, Wisconsin governor Scott Walker endorsed his rival Ted Cruz in the Republican race for the party’s nomination.

A surveillance video released by the police appears to show Mr Lewandowski grabbing a woman reporter for Breitbart News as she tried to ask Mr Trump a question during a March 8th campaign event.

The reporter filed a complaint and posted pictures of her bruised arm. That incident, and past remarks by Mr Trump about women, are hurting his support among female voters.

“Mr Lewandowski is absolutely innocent of this charge,” Mr Trump said in a statement.

“He will enter a plea of not guilty and looks forward to his day in court. He is completely confident that he will be exonerated.”

Mr Walker said his endorsement was not part of mainstream Republicans’ drive to block front-running Mr Trump, but instead was support for “a strong new leader”.

The Wisconsin governor, who was briefly in the race for the Republican nomination, announced his support for Mr Cruz and said he is “in the best position by far to both win the nomination of the Republican Party and then go on to defeat Hillary Clinton in the fall”.

It is unclear how much Mr Walker’s endorsement will help Mr Cruz. The governor’s approval rating has not cracked 40 per cent in more than a year.

1 US passengers fly into Dublin: ‘I’m here for six days. I guess I’ll have to stay inside’
2 California shuts down again as US coronavirus cases surge
3 Travel rules unlikely to include mandatory quarantine or cancelled flights
4 Covid-19: 200 to 250 people arriving in Ireland from US daily - Coveney
5 Father of five Irish citizen children wins appeal over refusal of citizenship
Real news has value SUBSCRIBE