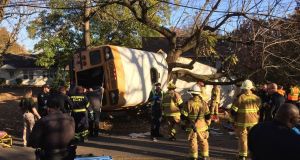 The driver, identified as Johnthony Walker (24) was taken into custody and faces five counts of vehicular homicide, reckless endangerment and reckless driving charges, USA Today reported. It was not immediately possible to verify the report independently.

Chattanooga Police said earlier on Twitter the driver was being questioned and was co-operating with investigators.

Five children were found dead inside the vehicle, which normally carries 35 passengers, and a student died at a hospital, said Melydia Clewell, spokeswoman for the Hamilton county district attorney’s office. It was not clear how many students were in the bus when it crashed.

The students were in kindergarten through fifth grade, she said, which would make them roughly aged between five and 10.

Ms Clewell said two or three children who were in hospital “could go either way”.

The crash left the bright yellow school bus wrapped around a tree, mangled and nearly severed in two. Rescue teams were still sifting through the wreckage of the bus, which was resting on its side, two hours after the crash.

Federal transportation investigators were also opening a probe into the crash, and planned to send a team to Chattanooga on Tuesday, the National Transportation Safety Board said.

School officials had not found any complaints filed against the driver, Ms Clewell said.

Two bloodied students were lying on stretchers in a front yard receiving attention from first responders nearly an hour after the crash, while others not taken to the hospital appeared dazed with cuts on their faces, the Chattanooga Times Free Press newspaper said on its website.

Asked about the crash after a hearing in Nashville, governor Bill Haslam said the state would offer its assistance.

“It’s a sad situation anytime there’s a school bus with children involved, which there is in this case,” he said.