16-year-old Alex Hribal has been identified by authorities as the student who allegedly went on a stabbing rampage in a Pennsylvania high school that left at least 22 people wounded. Video: Reuters 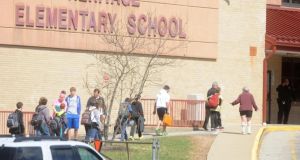 Pupils and parents are reunited following a mass stabbing yesterday at Franklin Regional Senior High School in Murrysville, a suburb of Pittsburgh, by a student in which 20 students and staff were injured. Photograph: Vincent Pugliese/EPA


An American teenager is in police custody after going on a stabbing rampage at a Pennsylvania school armed with two knives, injuring at least 20 people, including nine seriously.

The 16-year-old student was arrested by police at Franklin Regional High School in Murrysville, a suburb of Pittsburgh, about 15 miles east of the downtown area of the city. The assailant began his attacks just after 7.10am in classrooms and corridors at the school as classes were starting.

The school was evacuated quickly after a student or a member of staff triggered a fire alarm, the Murrysville police chief Thomas Seefeld told reporters. “We have a crime scene that is pretty vast,” Mr Seefeld said. Many of the victims were found on the ground floor hall way of the school or on the grass outside.

The assailant, who was not identified in the hours after the attack, was restrained by an assistant principal and handcuffed by a school police officer. “He was more shy and he kept to himself a lot,” Mia Meixner, a student at the school, told CNN of the attacker. “He was just shy and he didn’t talk to many people.”

Mr Seefeld said that investigators were looking into reports that there had been a threatening phone call between the suspect and another student on Tuesday night.

The injured were transported to nearby Forbes Regional Hospital and other hospitals. They were said to include 19 students and one security guard, some with serious stab wounds to the torso. Not all of the 20 students had suffered knife injuries but were hurt in the chaos following the attack.

Students ranging in age from 14 to 17 and a 60-year-old security guard were admitted to hospital. The injuries to four students were so severe that they had to be flown to hospital by helicopter.

Three patients were in surgery, two of whom, a 17-year-old male and a 14-year-old male, were in critical condition, while up to four were expected to recover from superficial wounds, Dr Mark Rubino at the hospital told reporters.

The patients undergoing surgery had been stabbed in the chest and abdomen, according to Chris Kauffman, the director of trauma at Forbes Regional Hospital. “Patients who are stabbed in the abdomen and chest by definition have life-threatening injuries,” he said, although all victims were expected to survive.

One doctor at another hospital, the University of Pittsburgh Medical Centre, who treated six stabbing victims, said that most of the students did not initially realise how they had been injured. “They just felt pain and noticed they were bleeding,” said Dr Timothy VanFleet, the hospital’s chief of emergency medicine. “Almost all of them said they didn’t see anyone coming at them .”

Reports of the incident emerged at 7.20am when the school was put “on lockdown” and announced that a “critical incident” ha d occurred at the high school.

The school posted an online notice saying that all primary schools were cancelled and that middle school and high school students were “secure.”

“I was shocked and saddened upon learning of the events that occurred this morning as students arrived at Franklin Regional High School,” Mr Corbett said. “As a parent and grandparent, I can think of nothing more distressing than senseless violence against children.”

President Barack Obama was updated about the incident, a White House spokesman told reporters in Texas, where Mr Obama is attending a memorial for last week’s shooting at Fort Hood military outpost. The president’s thoughts and prayers were with the victims and their families, the spokesman said. – Additional reporting: AP, Reuters