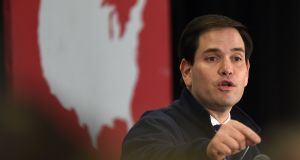 Republican White House hopefuls are entering the final 48 hours before the second nominating contest in New Hampshire, a make-or-break moment for several candidates, with a blitz of hard-sell campaigning.

Mr Rubio, rising in the polls since his strong third-place finish in Iowa last week, has emerged as the mainstream Republican mostly likely to challenge insurgents, businessman Donald Trump and conservative Texas senator Ted Cruz, in New Hampshire and beyond.

The Florida senator endured a horrid night on Saturday, however, appearing flustered and ill-prepared for the expected attacks when they came from long-shot candidate, the tough-talking Mr Christie.

The governor lashed the 44-year-old for being too scripted, lacking executive experience and skipping votes in Congress.

Mr Rubio struggled to respond, plucking stock statements from his stump speech and for the first time seemed unnerved on a debate stage after assured displays at the seven previous debates.

“That’s what Washington DC does. The drive-by shot at the beginning with incorrect and incomplete information and then the memorised 25-second speech that is exactly what his advisers gave him,” Mr Christie said, goading the surging Republican in a packed field.

The senator was adjudged the loser of the debate as Mr Christie claimed victory on a Sunday morning talk show.

“The whole race changed last night,” he told CNN. “Because you know there was a march among some of the chattering class to anoint Senator Rubio. I think after last night, that’s over.”

Mr Bush attacked Mr Trump again, this time for using “eminent domain” – the right to expropriate private land – to try to take an elderly woman’s property for a casino development in Atlantic City.

“He wants to be a tough guy tonight. I didn’t take the property,” said the businessman, shushing Mr Bush to boos from the crowd. The billionaire entertainer even took on the audience later in the debate.

Mr Trump was back to his pugnacious self, promising to torture Islamic State militants if captured: “I would bring back waterboarding and I’d bring back a hell of a lot worse than waterboarding.”

He featured next to doppleganger Larry David, the comedian, in a cameo on sketch show Saturday Night Live, as socialist immigrant “Bernie Sanderswitzky”. His character complained about the “1 per cent getting this preferential treatment” in an argument with David’s character about who gets seats in a lifeboat first in a Titanic-type skit.

Yesterday, the candidates engaged in a flurry of last-minute campaign stops – 15 in total – all before the Super Bowl.