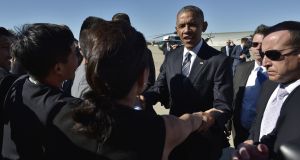 US president Barack Obama arriving in California for an entrepreneurship summit. In a statement he said the UK and the EU would remain “indispensable partners” of the US. Photograph: Mandel Ngan/AFP/Getty Images

US president Barack Obama has said that the “special relationship” that exists between the US and the United Kingdom “will not change” despite the decision of UK voters to leave the European Union.

Speaking at an entrepreneurship summit in California, Mr Obama said that he had spoken with UK prime minister David Cameron and based on their conversation he was “confident Britain is committed to an orderly transition out of the EU”.

“We agreed that our economic and financial teams will remain in close contact as we stay focused on ensuring economic growth and financial stability,” said the president in his first speech since the British EU referendum result.

Mr Obama made no reference to the support he offered to Mr Cameron’s campaign to keep the UK in the EU two months ago.

At the start of his address to entrepreneurs at Stanford University, he said that he had spoken to German chancellor Angela Merkel about Brexit and that they had agreed that he and EU leaders would “work closely in the weeks and months ahead”.

Prior to the vote, Mr Obama said that “automation and globalisation” were creating wealth and opportunity for a very small group of highly skilled people, while a larger and larger group were feeling redundant in the economy.

Offering a view on why British voters opted out of Europe, Mr Obama said that the referendum result highlights the “ongoing changes and challenges that are raised by globalisation”.

“While the UK’s relationship with the EU will change, one thing that will not change is the special relationship that exists between our two nations – that will endure,” he said.

The EU would “remain one of our indispensable partners,” he said, and the Nato alliance with the UK would “remain a cornerstone of global security”.

Earlier, Mr Obama said in written remarks released by the White House that the UK would remain “an indispensable partner” of the US “even as they begin negotiating their ongoing relationship to ensure continued stability, security and prosperity for Europe, Great Britain and Northern Ireland, and the world”.

Mr Obama publicly intervened in the debate when he urged British voters to support the UK’s continued membership in the EU in an impassioned plea during a visit to London in April. He called the outcome of the referendum “a matter of deep interest to the United States because it affects our prospects as well”.

The UK would be “in the back of the queue” when it came to negotiating a trade deal with the US, he said, warning that “it’s not going to happen anytime soon”.

Speaking at a public engagement in Dublin on his six-day visit to Ireland, US vice-president Joe Biden said that he and Mr Obama had hoped for a different result but that he respected the will of the people in the UK.

Despite the vote to leave the EU, Mr Biden talked up his country’s “longstanding relationship with the United Kingdom,” adding: “We fully respect the decision they have made.

“And I want to ensure all of you in this room that America’s very special bond with the United Kingdom runs deep and will endure,” said the vice-president.

“And our relationship with Ireland and the European Union will remain the cornerstone of our global engagement.”

Former US envoy to Northern Ireland, Richard Haass, president of the Council on Foreign Relations think tank, tweeted in response to the result that “pro-EU stances could fuel Sinn Féin push 4 vote for its stated goal of unity w Ireland. NI stability could be another casualty of Brexit.”

Sinn Féin repeated its call for a Border poll on Irish reunification on the island of Ireland following the referendum, in which Northern Ireland voted 56 per cent to 44 per cent in favour of remaining in the EU.

Irish-American congressman Brendan Boyle, a Pennsylvania Democrat whose father is from Co Donegal, said in a statement that the US would “strongly oppose the re-establishment of a hard Border between the six counties of Northern Ireland and the Republic of Ireland.”

He continued: “The United States is one of the guarantors of the Good Friday Agreement and, as such, our policy will be to fight against any backsliding into the bad old days of Border checkpoints.”

Presumptive Democratic presidential nominee Hillary Clinton, who had opposed Brexit, said that the US had to make sure “the economic uncertainty” did not affect American working families and to make clear its “steadfast commitment to the special relationship with Britain and the transatlantic alliance with Europe”.

“This time of uncertainty only underscores the need for calm, steady, experienced leadership in the White House to protect Americans’ pocketbooks and livelihoods, to support our friends and allies, to stand up to our adversaries and to defend our interests,” she said in a statement released by her campaign team.

“It also underscores the need for us to pull together to solve our challenges as a country, not tear each other down.”

Republican candidate Donald Trump, her likely rival in November’s US presidential election, said that it was a “great thing” that the people of the UK have “taken back their country in voting to leave the EU”.

Mr Trump made his remarks during a visit to Scotland where he was attending the reopening of his refurbished hotel and golf course at Turnberry in Ayrshire.

“They’re angry about many, many things in the UK, the US and many other places. This will not be the last.”