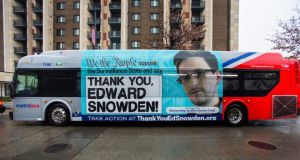 An advertisement thanking NSA leaker Edward Snowden appears on the side of a Metrobus in downtown Washington, last month. Photograph: EPA/Jim Lo Scalzo

The National Security Agency is tracking the location and movements of hundreds of millions of mobile phones outside the United States in an effort to find suspicious travel patterns or coordinated activities by intelligence targets, according to secret documents leaked by former NSA contractor Edward J Snowden.

To carry out the tracking, the agency collects nearly 5 billion records on mobile phones outside the United States each day from taps on fiber-optic cables and other communication conduits that carry mobile phone traffic, the documents say. Enough of that data is saved to track a small fraction of the phones over time.

The documents and the tracking program were reported by The Washington Post. Mobile phone calls, text messages and other traffic must be routed through global networks from the caller or sender to the intended recipient - another mobile phone, for example. That routing is guided by so-called metadata, which acts as a sort of addressing system for the network. The metadata inevitably contains information about where a call originated and therefore the location of a mobile phone.

In October, The New York Times reported that the agency carried out a secret test project in 2010 and 2011 to collect large amounts of data on the location of Americans’ mobile phones inside the United States. James R Clapper Jr, the director of national intelligence, confirmed the existence of the test program but said that it was never put into practice.

At the time, Mr Clapper said that the United States was not collecting location information on Americans under Section 215 of the Patriot Act, which the agency says is the basis for its formerly secret program to collect telephone logs - another term for metadata - of all domestic calls. The domestic logs are collected directly from telephone companies.

The overseas collection described in the latest documents do not appear to raise legal questions in the United States, even though it is likely that phones carried by many Americans overseas would be included in the collection effort. Still, the revelation is certain to stoke further international resentment because the scope of NSA spying overseas seems to widen with the leak of each new document.

The American Civil Liberties Union, in a statement, protested the collection of phone data on such a wide scale, saying that the program was particularly disturbing “given the substantial number of Americans having their movements recorded by the government.”

The premise of the NSA’s overseas tracking program seems to be that algorithms can sift through billions of records and pick out suspicious activity like a terrorist planning session, or a series of phone calls to initiate an attack. The agency’s algorithms - like the methods used to track a contagion in a disease outbreak - would follow intelligence targets and provide agents with information on what sort of plan is afoot and how to stop it.

The NSA has been either reluctant or unable to provide detailed information on whether its vast collection programs have an extensive record of pulling those needles out of the haystack of data. It has long been standard in criminal investigations to use mobile phone tracking data as a way of finding a suspect’s location. It can be “triangulated,” for example, based on its relative proximity to nearby mobile phone towers. The latest documents make clear that the NSA is collecting location data on a scale that was heretofore unimaginable: on millions of people around the world every day.