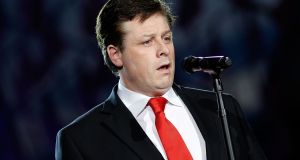 Anthony Kearns: ‘I suppose music is the crowd-calmer before the pope. We are the peace-making force. Music tames the savage beast.’ Photograph: Paul Morigi/Getty Images for Capitol Concerts

At a ceremony in Philadelphia tomorrow afternoon, Irish tenor Anthony Kearns will be the opening act for one of the biggest events of his career.

The singer, from Kiltealy near Enniscorthy in Co Wexford, will perform at the last major event of Pope Francis’s five-day trip to the US: the Papal Mass at the conclusion of the World Meeting of Families on Benjamin Franklin Parkway running through Philadelphia.

Kearns (44) is expecting a “sea of people” in front of the stage on the famous boulevard, considered Philadelphia’s Champs-Élysées.

The Mass, outside the Philadelphia Art Museum (on the steps made famous by the film Rocky), is expected to be attended by more than 1.5 million people. The pope, on his first visit to the US and the longest trip of his papacy, will fly home shortly afterwards.

“I am the last person on before the Mass so I am effectively opening for the pope. I am the last performer and then he is on his own,” said Kearns, speaking from his home in Florida.

A member of the Irish Tenors, Kearns, a devout Catholic, has performed on big occasions before and for dignitaries, including three US presidents, at the funeral of president Ronald Reagan, and at the 9/11 Museum in front of former New York mayor Michael Bloomberg.

“It is a huge honour,” said Kearns, who was invited to perform for the pope arising from his charitable work and performing at Catholic events.

“I have had the good fortune of performing for presidents and leaders of countries but this is special, as a Catholic, an Irishman and a singer,” he said.

Kearns follows a long line of famous Irish singers to have performed for popes, dating back to John McCormack who was made a Papal Count by Pope Pius XI in 1928 in recognition of his work for charities.

On Thursday, Kearns said he was not sure what songs he would sing tomorrow but has suggested How Great Thou Art, Shelter Me and Be Thou My Vision. He also wants to perform one with an Irish angle, You Raise Me Up, written by Tipperary-born Brendan Graham.

Kearns said he might be a little nervous singing in front of so many people but “you need a little anxiety to keep you sharp.

“I suppose music is the crowd-calmer before the pope,” he said. “We are the peace-making force. Music tames the savage beast.”