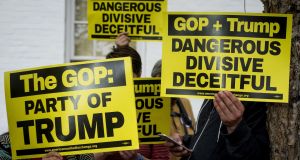 Demonstrators hold signs protesting against Donald Trump, presumptive Republican US presidential nominee, during a meeting he was having with US House Speaker Paul Ryan at the Republican National Committee headquarters in Washington DC, on Thursday, May 12th, 2016. Photograph: Pete Marovich/Bloomberg 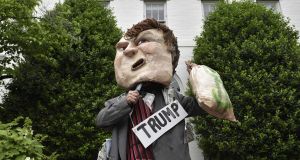 Presumptive Republican presidential nominee Donald Trump and the Speaker of the US House of Representatives Paul Ryan put up a united front after a highly anticipated meeting showing they were trying to heal internal divisions after a brutal primary election.

Ryan, the highest elected Republican, stopped short of endorsing Mr Trump as the party’s presidential nominee after the two men met for the first time in Washington.

Their meeting came just days after the House Speaker said he was “just not ready” to back the billionaire with whom he clashed during the primary campaign over his rhetoric.

The men met at the Republican national committee offices on Capitol Hill on Thursday morning as a crowd of reporters and pro- and anti-Trump activists camped outside.

Afterwards, Mr Trump and Mr Ryan issued a joint statement saying they were in agreement around stopping Hillary Clinton, the likely Democratic nominee in November’s presidential election, from winning the White House.

“That is why it’s critical that Republicans unite around our shared principles, advance a conservative agenda, and do all we can to win this fall,” they said.

“With that focus, we had a great conversation this morning. While we were honest about our few differences, we recognise that there are also many important areas of common ground.

“We will be having additional discussions, but remain confident there’s a great opportunity to unify our party and win this fall, and we are totally committed to working together to achieve that goal.”

Coming a week after Mr Trump defeated the last of 16 Republican presidential hopefuls, the two described their first meeting as “a very positive step toward unification.”

Speaking afterwards at a news conference in the US Capitol, the 2012 Republican vice-presidential candidate said he was “very encouraged” by his discussion with the New York businessman, but acknowledged they exchanged differences of opinion on several issues.

“The process of unifying the Republican Party which just finished a primary about a week ago, perhaps one of the most divisive primaries in memory, takes some time,” he said.

Acknowledging the strong support for other Republican candidates during the primary, Mr Ryan said he wanted a genuine unification of the party.

“It’s very important that we don’t fake unifying, we don’t pretend unification, that we truly and actually unify so we are full strength in the fall,” he said.

Mr Trump’s apparent victory in the Republican primary had fractured the party with a blustering campaign that has taken aim at Mexicans, Muslims and women with anti-immigrant policies, bombastic rhetoric and vicious insults.

Mr Ryan broke with his policy of not commenting on the race twice during the campaign - when he criticised Mr Trump’s proposal to introduce a temporary ban on Muslims entering the US, and after Mr Trump declined to disavow the support of a former Ku Klux Klan leader.

In the wider campaign, Ms Clinton heaped further pressure on Mr Trump over his failure to release his tax returns, noting she and her husband had released 33 years of tax returns.

Mr Trump, a property developer, told the Associated Press on Tuesday he does not plan to release the records, which is common practice for candidates for elected office, because he was being audited by the Internal Revenue Service.

Mitt Romney, the 2012 Republican presidential nominee, has called the decision “disqualifying”, and questioned whether Mr Trump is hiding “a bombshell.”

“Given Mr Trump’s equanimity with other flaws in his history, we can only assume it’s a bombshell of unusual size,” he wrote in an online post on Facebook on Wednesday.