Donald Trump on back foot heading to Wisconsin 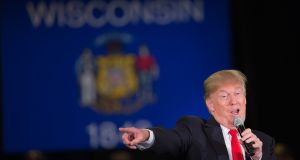 Republican presidential candidate Donald Trump speaks to guests during a campaign rally at the Radisson Paper Valley Hotel in Appleton, Wisconsin. The state’s voters go to the polls for the Republican primary on Tuesday. Photograph: Scott Olson/Getty Images

This week was the first since the inaugural qualifying round of the US presidential election in Iowa on February 1st that there hasn’t been primary or caucuses. The vacuum has not done any favours to Donald Trump.

Without the bragging rights of a winning ballot to claim, the Republican frontrunner has endured a horrific week in the never-ending presidential news cycle. Commentators should be loathe to declare that the latest backlash amounts to a turning of the tide against the brash billionaire. Reports of the reality TV star’s demise have been greatly and regularly exaggerated before.

Trump was forced into a strong public defence of his campaign manager Corey Lewandowski against a battery charge for allegedly grabbing the arm of a female reporter at a campaign event at his golf club in Jupiter, Florida. He also had to make a damaging about-turn on his statement that “there has to be some form of punishment” for women who undergo illegal abortions.

The businessman’s camp released a statement, after he made the remarks in a televised “town hall” interview with MSNBC anchor Chris Matthew, saying that women who obtain abortions are the victims and that doctors who perform the service are the only ones who should be punished. But the damage was done. Republicans and anti-abortion groups reacted with alarm to Trump’s comments on an issue they have delicately carved out a position on, further hurting his position among female voters.

The latest controversial remarks from Trump brought the spotlight again on his treatment of women during this campaign, from his attack on Fox News anchor Megyn Kelly suggesting that her tough questioning of him at a televised debate last August was down to the fact that she was menstruating, to his insults about the appearance of former candidate Carly Fiorina.

The tycoon has tried to put out the fires with another of his sweeping declarations: “Nobody’s a bigger supporter of women than Donald J Trump. ”

His recent behaviour, however, has been making even his staunchest supporters nervous. Ann Coulter, the right-wing pundit and a long-term defender of the businessman, reacted uncomfortably to Trump retweeting an unflattering photograph of Heidi Cruz, wife of his main challenger, Ted Cruz.

Coming out of the past stormy week, the next state to vote in the Republican presidential primary, Wisconsin on Tuesday, presents a strong opportunity for the Stop Trump movement. They are trying to block Trump from reaching the 1,237 delegates he needs to secure the party’s nomination in the first ballot of nationwide primaries and caucuses before the party’s convention in July.

A Fox Business poll on Thursday gave Cruz a 10-point lead over Trump in Wisconsin and the first-term Texas senator has the backing of the state’s governor Scott Walker, a former presidential candidate, and other elected party figures in the state. It is no surprise that Trump is planning to blitz the state with a series of appearances in Wisconsin this weekend.

The last tally of delegates shows Trump leading Cruz by 736 delegates to 463 delegates with 943 still at stake in the remaining 17 state contests.

There are only 42 delegates up for grabs in the midwestern state on Tuesday but a loss to Cruz could hurt Trump’s momentum heading to the New York primary (95 delegates) on April 19th and five northeastern states of Connecticut, Delaware, Maryland, Pennsylvania and Rhode Island (172 delegates in all) on April 26th.

Beyond the likelihood the Republican primary could well be decided at a contested convention in July, polls show Trump performing badly among the general electorate against Democratic candidate Hillary Clinton, the party’s likely nominee in November.

Trump’s poll figures among women, blacks and Hispanics are horrendous and a recent Washington Post/ABC News poll last month even showed a majority of non-college white men and white men generally – a key constituency within the Trump coalition – disapproved of him.

Larry Sabato, a politics professor at the University of Virginia, ran the figures on a Trump-Clinton showdown for his forecasting website Crystal Ball, based on the latest data and it makes for painful reading for Republicans.

It would not even be close: Clinton would win 347 electoral college votes (she needs 270 to win) as they see Trump unlikely to take any of the swing states: Colorado, Florida, Iowa, Nevada, New Hampshire, Ohio or Virginia.

“The Republicans now find themselves in a deep hole,” wrote Sabato’s team.