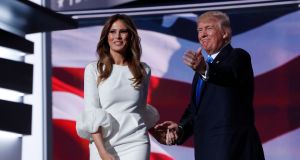 Melania Trump, wife of Republican presidential candidate Donald Trump, walks to the stage as Mr Trump introduces her during the opening day of the Republican National Convention in Cleveland on Monday. Photograph: Carolyn Kaster/AP

Paul Manafort, campaign manager to the soon-to-be- crowned Republican presidential nominee, argued it would be “absurd” for the would-be first lady to copy another speech in an address to 35 million people, given how heavily it was going to be scrutinised.

And yet the Trump team allowed it to happen, prompting critics to question the campaign’s professionalism in a week when the TV reality star must present himself as a credible leader to be the Republican party’s standard-bearer in the November presidential election.

“Amateur hour” was how the Trump campaign’s start to the four-day Republican Party convention was repeatedly described yesterday, feeding a high degree of discord on a campaign team so eager to use the Republican gathering in Ohio to heal divisions within the party.

The self-inflicted controversy overshadowed a speech by Melania Trump, the billionaire’s third wife, that was effective in softening the tough-as- nails persona of a candidate who has split the Republican Party and divided the country in a vitriolic campaign.

The accusations of plagiarism dominated day two of the Republican national convention as the Trump camp was put on the back foot.

“There’s no cribbing of Michelle Obama’s speech,” said campaign manger Manafort, who came under increased pressure to carry the can for the opening-night calamity.

“These were common words and values that she cares about, her family and things like that,” he said. “I mean, she was speaking in front of 35 million people last night, she knew that. To think that she would be cribbing Michelle Obama’s words is crazy.”

Manafort even haggled over the number of offending plagiarised words in Ms Trump’s speech, denying that it was 58, as the media suggested, and more like 30.

He also played the gender card by claiming double standards with the Democratic campaign. He drew Hillary Clinton, his boss’s rival in the November presidential election, into his defence of Ms Trump.

“This is, once again, an example of when a woman threatens Hillary Clinton, how she seeks out to demean her and take her down. It’s not going to work,” he said.

Both talked about being raised with the same values: “that you work hard for what you want in life; that your word is your bond and you do what you say,” they each said.

“Because we want our children – and all children in this nation – to know that the only limit to the height of your achievements is the reach of your dreams and your willingness to work for them,” said Ms Obama eight years ago.

“Because we want our children in this nation to know that the only limit to your achievements is the strength of your dreams and your willingness to work for them,” said Ms Trump on Monday night.

The bungling response to the controversy compounded problems for the Trump camp.

“I just don’t see it,” New Jersey governor Chris Christie, a former candidate and now a senior adviser to Trump told CNN, saying that 93 per cent of the speech was different from Ms Obama’s speech.

“If we’re talking about 7 per cent of a speech, that was really, universally considered to be a good performance by Melania. I know her. There’s no way that Melania Trump was plagiarising Michelle Obama’s speech,” he said.

A hastily released statement in the early hours of Tuesday said the speech was composed by “Melania’s team of writers”, contradicting her earlier claims in an interview for NBC’s Today programme that she wrote it “with as little help as possible”.

Republican national committee chairman Reince Priebus, the party official overseeing the convention, said he would “probably” fire whoever was responsible.

Trump’s former campaign manager, Corey Lewandowski, who was himself fired by the billionaire last month, said the culprit should be dismissed.

But the Trump camp said it had no plans to fire anyone over the scandal, a new departure for a reality TV star who found global fame for firing people.