Defendant shot dead in US courtroom by officers

FBI says man rushed towards witness with a pen in an ‘aggressive, threatening manner’

An accused street gang member standing trial in federal court in Salt Lake City has died after being shot by a deputy marshal. The defendant allegedly attacked a witness who was testifying against him, law-enforcement officials said. Video: Reuters 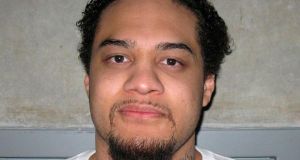 Siale Angilau (25) an accused street gang member, is seen in a picture provided by the Utah Department of Corrections taken in February, 2012. Photograph: Reuters

With stunned jurors looking on, a defendant in a long-running gang prosecution was shot and killed by a deputy US marshal in the federal courthouse yesterday after he lunged to attack a witness testifying in his trial, federal authorities said.

It was a shocking scene inside the silvery new federal courthouse in the centre of Utah’s capital: multiple gunshots cut through the staid air of a judge’s courtroom.

Marshals stood with their weapons drawn. Spectators dived under benches. The courthouse was locked down for hours, cordoned off by yellow police tape and armed guards.

The shooting took place in the early stages of the trial of Siale Angilau (25) who federal prosecutors said had been part of the Tongan Crips gang.

The authorities said the group, composed mainly of Tongan men, had committed a yearslong string of robberies, assaults and carjackings around Utah, including the shooting of two deputy US marshals in 2007.

Angilau was one of more than a dozen accused members of the gang who had been indicted in 2010 on a wide range of federal charges.

His trial was the last of the lot, the authorities said. Jurors had taken their seats in the courtroom of Judge Tena Campbell, and a co-operating witness was testifying for prosecutors when chaos erupted.

Angilau apparently grabbed a pen or pencil, charged toward the witness and was met by gunfire, said Melodie Rydalch, a spokeswoman for the US attorney’s office.

Rydalch said it did not appear that Angilau was shackled at the time of the attack. Defendants who are held in lockup before their trials regularly wear handcuffs and jail uniforms at pretrial court appearances, but are often allowed to wear street clothes and are not visibly restrained when a jury is present to weigh their fate.

A statement from the FBI said Angilau had rushed the witness stand in “an aggressive, threatening manner” and had been shot in the chest. He was taken to a hospital and pronounced dead yesterday, the statement said.

No one else was hurt, officials said.

Campbell, who declared a mistrial before Angilau’s death was reported, said federal marshals had held Angilau at gunpoint after the shooting as the jurors and court employees looked on. The judge spoke with the jurors afterward and said they were “visibly shaken and upset.”