Democratic candidates Hillary Clinton and Bernie Sanders clashed in their most contentious presidential debate yet as the former secretary of state dismissed his attacks on her Wall Street ties as a “very artful smear.” Video: Reuters 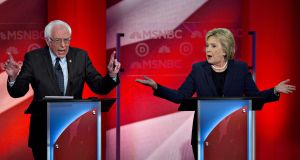 Senator Bernie Sanders and former secretary of state Hillary Clinton at the Democratic presidential candidate debate at the University of New Hampshire in Durham on Thursday. Photograph: Andrew Harrer/Bloomberg.

Democratic candidates Hillary Clinton and Bernie Sanders clashed in their sharpest exchanges during a presidential debate as the former secretary of state dismissed his attacks on her Wall Street ties as a “very artful smear.”

The gloves came off on the issue of campaign finance and Mrs Clinton’s past donations from Wall Street companies as the two Democrats met for the final debate before the second presidential nominating contest in the New Hampshire primary on Tuesday.

The debate, hosted by the MSNBC news network, was the first opportunity for the candidates to face off in a head-to-head for the first time since the only other candidate, former Maryland governor Martin O’Malley, dropped out after Monday’s Iowa caucuses.

Mrs Clinton came out aggressively defending herself on one of the most vulnerable areas that she has struggled to answer definitely - the millions of dollars she has received from Wall Street.

She challenged the democratic socialist on his accusations that she is beholden to Wall Street, rejecting the suggestion that anyone in receipt of donations or speaking fees from interest groups “has to be bought”.

“I just absolutely reject that, Senator,” she told Mr Sanders. “I really don’t think these kinds of attacks by insinuation are worthy of you”.

The one-time presumptive Democratic nominee gave her fiercest performance just days after she eked out a narrow win over the Vermont senator in Iowa and before the New Hampshire ballot which the latest polls show Mr Sanders leading by an average of 20 points.

The 74-year-old has questioned whether Mrs Clinton would be willing to stand up to big business when she has big corporate-funded political groups supporting her and has received fees from Wall Street.

“Enough is enough. If you’ve got something to say, say it directly. You will not find that I ever changed a view or a vote because of any donation that I ever received,” said Mrs Clinton.

The former secretary of state admonished the senator for the implications of his attacks.

“I think it’s time to end the very artful smear that you and your campaign have been carrying out in recent weeks and let’s talk about the issues that divide us,” said Mrs Clinton over boos from the crowd and groans from Mr Sanders.

Responding angrily, he said repeatedly: “Let’s talk about issues,” and shot back, pointing out sarcastically that “some people might think” that the billions spent on lobbying and campaign contributions may have led to the deregulation of Wall Street in the 1990s.

Mr Sanders compared a “kid” caught with marijuana getting a criminal record with Goldman Sachs paying a $5 billion government fine for defrauding investors and escaping without a criminal record.

“That is what power is about. That is what corruption is about. And that has to change in the United States of America,” he said.

Asked whether she would be willing to release the transcripts of her paid speeches to Goldman Sachs and other companies, Mrs Clinton said: “I don’t know the status, but I will certainly look into it.”

Her answer will likely turn the content of her paid speeches into a campaign issue as her controversial private emails from her time serving as secretary of state have been become over the past year.

Concerns about her relationship with Wall Street are one of the reasons why young people under 30 have turned away from Mrs Clinton and are supporting Mr Sanders in such large numbers.

On Wednesday night, when asked at a CNN televised questions-and-answers session, whether she had to receive so much money from Goldman Sachs, she shrugged it off, saying: “That’s what they offered.”

Asked at last night’s debate whether she had been “too dismissive of voters’ concerns” about her receipt of $675,000 (€609,000) in speaking fees from Goldman Sachs, Mrs Clinton said: “I think I may not have done the job I should in explaining my record”.

Defending her decision to take speaking fees, she said during last night’s debate that she spoke to other people and industries, and attempted to show that she has been tough on big business.

“I went to Wall Street before the crash,” she said. “I was the one saying you’re going to wreck the economy because of these shenanigans with mortgages”.

Mrs Clinton claimed that “the Wall Street people” were “trying to beat me in this primary” in response to the position she is taking.

US Federal Election Commission data, analysed by the Washington Post this week, showed that she has received $21.4 million from the financial services industry to support her 2016 presidential bid.

The two Democratic candidates clashed again on who was the real progressive and whether experience in Mrs Clinton’s case or judgment in Mr Sanders’s counted when it came to foreign policy.

The biggest round of applause of the night came to a comment from Mr Sanders criticising their Republican rivals.

“On our worst days, I think it is fair to say that we are 100 times better than any Republican candidate,” he said.