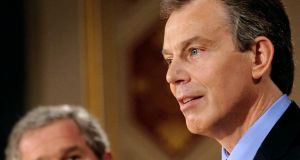 Former US president George W Bush defended his decision to invade Iraq in 2003 in response to the Chilcot report’s criticisms of the UK’s handling of the Iraq war on the basis that the conflict ousted Iraqi president Saddam Hussein.

Mr Bush did not speak publicly in the aftermath of the report’s publication as he was marking his 70th birthday at a cycling event at his Texas ranch with “Wounded Warriors” – veterans of the US wars in Iraq and Afghanistan.

The former president’s spokesman, Freddy Ford, released a statement saying Mr Bush had not had a chance to read the Chilcot report but said he still supported his decision to invade Iraq in March 2013.

“Despite the intelligence failures and other mistakes he has acknowledged previously, President Bush continues to believe the whole world is better off without Saddam Hussein,” his spokesman said.

“He is deeply grateful for the service and the sacrifice of American and coalition forces in the war on terror. And there was no stronger ally than the United Kingdom under the leadership of prime minister Tony Blair. ”

A memo revealed that Mr Blair wrote to Mr Bush eight months before the invasion promising him: “I will be with you, whatever.”

White House spokesman Josh Earnest said that he didn’t know if anyone in the Obama administration had been able to read the report yet but reiterated the president’s “longstanding opposition to the war in Iraq”.

“[Mr Obama] has been dealing with the consequences of that fateful decision for the entirety of his presidency and future presidents will likely do the same,” he said.

Paul Bremer, the US diplomat who managed the US occupation of Iraq after the 2003 invasion, supported some of Chilcot’s key criticisms, agreeing that the US and UK government’s pre-war planning was “inadequate” and that political leaders ignored concerns raised by military leaders.

“The commission noted that ‘bad tidings’ tended not to be heard in London,” Mr Bremer wrote in an opinion piece in the Guardian.

“The same was true in Washington. Before the war, a few American military officers suggested the need for a substantial post-conflict military presence. They were not heard.”

Neo-conservative commentator David Frum, a speechwriter to Mr Bush, said that domestic factors in the Middle East contributed to the post-invasion conflicts.

“US-UK intervention offered Iraq a better future. Whatever the West’s mistakes: sectarian war was a choice Iraqis made for themselves,” he tweeted.

“No US-UK intervention in Syria: and it collapsed into sectarian war even more horrible than Iraq’s.”