White House spokesman Josh Earnest says the Obama administration is 'not particularly concerned' about a new report that disputes their story surrounding the killing of Osama bin Laden. Video: Reuters 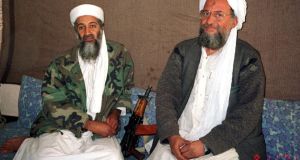 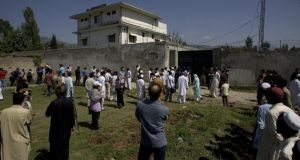 Local people and media gather outside the perimeter wall and sealed gate into the compound and a house where al-Qaeda leader Osama bin Laden was killed on Tuesday, May 3, 2011. Photograph: Anjum Naveed/AP 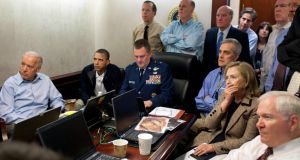 US President Barack Obama, Vice President Joe Biden, Secretary of State Hillary Clinton and members of the national security team receive an update on the mission against Osama bin Laden in the Situation Room of the White House May 1, 2011 in Washington, DC. Photograph: Pete Souza/The White House via Getty Images

Four years after a US Navy Seal team killed Osama bin Laden in his compound in Abbottabad, Pakistan, lingering questions remain about the raid and what led up to it.

Now, in a 10,000-word article in The London Review of Books, journalist Seymour M Hersh challenges nearly every facet of the semi-official narrative that has emerged over the years, alleging a vast cover-up that involves hundreds, possibly thousands, of people and goes all the way to president Barack Obama himself.

On Monday, the White House press secretary, Josh Earnest, said the article is “riddled with inaccuracies and outright falsehoods.’’

The gist of Hersh’s sprawling report is that Pakistan harbored bin Laden for years with money paid by Saudi Arabia. Once the United States found out the Pakistanis had bin Laden, Hersh writes, it offered Pakistan’s generals a choice: Help the United States kill him or watch billions of dollars in US aid disappear.

The Americans and the Pakistanis then worked together to plot the raid, Hersh writes.

In its bold claims, Mr Hersh’s article, relying largely on anonymous sources, pairs plausible alternatives to the details about the raid presented by the administration with a number of much more questionable claims.

Were it not for the byline of Mr Hersh, a Pulitzer Prize-winning journalist who first gained notice more than 45 years ago for exposing the My Lai massacre in Vietnam, the story would likely have been readily dismissed and gained little attention.

In one conceivable episode, Mr Hersh writes that US intelligence officials were alerted to bin Laden’s whereabouts by a Pakistani military officer who walked into the US Embassy in Islamabad and was subsequently paid a reward and moved by the CIA to the United States.

The account told by the Obama administration after the raid - that the CIA tracked down bin Laden through the work of dogged analysts - was a ruse intended to protect the real informant, according to Mr Hersh.

It is a deception that the CIA has employed before, claiming for years that it discovered that one of its own, Aldrich H Ames, was passing intelligence to the Soviet Union through the work of a team of analysts.

The truth that eventually emerged was that crucial evidence against Ames came from a Soviet spy working for the CIA.

Yet other claims by Mr Hersh would have required a cover-up extending from top American, Pakistani and Saudi officials down to midlevel bureaucrats.

One example is Mr Hersh’s claim, based on anonymous sources, that administration officials were lying when they said the Seal team recovered a trove of intelligence from bin Laden’s compound.

If he is right, that means the US knowingly allowed an FBI agent to perjure himself at a federal trial of a member of al-Qaeda in New York in February.

In his testimony, the agent described in detail how he received computers, hard drives, documents and other material from the Seal team members immediately after they landed at a base in Afghanistan.

He then spent 17 hours cataloging the material before it was put on a plane back to the United States.

The detail, if manufactured, is stunning: The agent, Alexander Otte, listed the types of materials he had received, including the size of some of the digital storage devices recovered (a two-gigabyte micro-SD card, a four-gigabyte thumb drive), and even the brands of the devices (Sony and Kingston).

Mr Otte also testified that he saw the body of bin Laden, which Mr Hersh reported had been largely dismembered by gunfire during the raid.

The Seal team members then threw some body parts out of the helicopters on the way back to Afghanistan, Mr Hersh writes, though he did report that bin Laden’s head was largely intact.

Mr Otte, in his testimony, offered a very different account: Asked if the Seal team members had a body with them, he said, “It was the body of Osama bin Laden.” At no point did he describe the body as being in pieces or having been decapitated.

Mr Hersh is standing by his article. In a brief telephone interview on Monday, he said, “You can have your skepticism.” His manner was cheerful and breezy, and he seemed unfazed about the controversy his reporting has stirred up. It is not the first time that Mr Hersh’s work has been met with hostility from the authorities, and he laughed loudly at the mention of the denials from the White House and others.

“Those are classic nondenial denials,” he said, before rushing off to take a call from another reporter.

Mr Hersh is not the first person to present this version of events. A similar account was presented in August, 2011, on the blog The Spy Who Billed Me, which is run by RJ Hillhouse, who tracks national security issues.

Mr Hillhouse lacks the pedigree of Hersh, who, more recently, detailed the abuse committed at the Abu Ghraib prison in Iraq. There are also the varying narratives spun out by the White House in the days and weeks after the raid.

Mr Hersh’s story would probably have gained much less traction had it not been for the often contradictory details presented by the Obama administration after the raid, and the questions about it that remain unanswered.