Bernie Sanders the ‘only hope’ for his Democrat supporters

While campaigning in California Democratic presidential candidate Bernie Sanders has slammed his Republican rival, Donald Trump, as "Mr. Macho" for appearing to agree to a debate and then backing out. Video: REUTERS 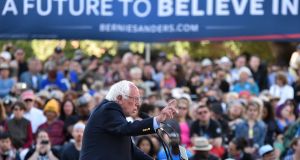 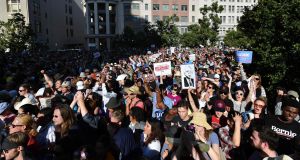 Bernie Sanders began another mass rally, this one in Oakland, California, with his usual shtick about being written off as a fringe candidate a year ago.

The 74-year-old democratic socialist from New York via Vermont would be the main surprise candidate of this presidential election cycle if it weren’t for another outsider New Yorker, billionaire businessman Donald Trump securing the Republican nomination.

Speaking to an estimated 13,000 people in Frank Ogawa Plaza in front of Oakland City Hall on Monday afternoon, Sanders poked fun at his dishevelled appearance, mocking the media for writing off his non-presidential suits and hairstyle and joking that the suit he was wearing in Oakland was probably worth $99.

“Despite those presidential attributes, they didn’t think we would go very far but a year has come and gone, and until now we have primaries and caucuses in 20 states in this country, we have now well over nine million votes,” he told the crowd, revelling in his unconventional campaign in an unconventional presidential election.

Sanders is the relentless boxer who refuses to be knocked out, despite taking some knock-downs through various rounds. He is holding out, some believe in desperation, for a long-shot victory on a points decision when the Democratic judges deliberate at the party’s national convention in Philadelphia in late July and the presidential nominee is crowned.

Hillary Clinton, the Democratic frontrunner, is mathematically a certainty to be the party nominee based on her support among pledged delegates picked up in the primaries and caucuses held so far in 44 states, and super delegates, the party’s top brass who have committed themselves to her in overwhelming numbers.

As the primary enters the final stretch over the coming fortnight, she is just 73 delegates away from the magic number of 2,383 delegates to clinch the nomination. She has 541 super delegates to Sanders’s 43, fuelling his claims that the game is rigged by party insiders who picked her as the nominee long before voters had their say in the primary.

Still, the independent senator remains in the race. Privately, Clinton supporters are seething that a politician who isn’t even a Democrat has refused to concede what they see as inevitable defeat to the former US secretary of state and is distracting her from the most important challenge at hand: the fight with Trump.

Standing between Clinton and the Democratic presidential nomination is California, the biggest state contest and one of the most progressive in the Democratic primary with 475 pledged delegates up for grabs. Victory in the Golden State would secure her nomination in a convincing manner, erasing doubts about her candidacy. A loss to Sanders might not cost her the nomination based on the proportionate distribution of delegates based on popular votes but it would certainly weaken her heading into the general election against Trump.

A poll by the Public Policy Institute of California last week showed Clinton and Sanders in a far tighter race than expected in the state, with her lead over her dogged rival narrowing among likely voters to 46 per cent to 44 per cent, falling within the margin of error.

To avoid an embarrassing defeat to Sanders, Clinton cancelled an event in New Jersey on Monday to spend more time campaigning in California in the run-up to the state’s primary next Tuesday and to match Sanders’s barnstorming through the state.

The septuagenarian senator outperforms Clinton in hypothetical general election match-up polls against Trump, often by large margins – a point he repeated in California on Monday and which he said he plans to make to delegates at the convention in Philadelphia.

He argues too that his campaign has shown that he has the support of millions of Americans, including – overwhelmingly – Democratic voters under 45 years old, and that Republicans lose when Democrats come out to vote in large numbers.

“So if the Democrats want a campaign that will make certain that the disaster of Donald Trump will not become president, we are that campaign,” he said.

Savannah Scott (30), a student from Louisiana who is visiting California, believes the super delegate system is rigged and that Clinton winning is not a foregone conclusion.

“Clinton is better than Trump or any Republican but we need to fight as hard as we can now and not concede to Hillary yet. They have been saying it’s over for months but it’s not over,” she said, wearing a spoof Star Wars t-shirt with the senator dressed as a Jedi and Princess Leia’s cry for help: “Help us Bernie Sanders: You’re Our Only Hope.”

Sanders supporter Aidan Guthrie (20), a food industry worker, said he would vote for Clinton in November but only if polls showed a close race with Trump in California. Backing Sanders, in his view, has a purpose well beyond the 2016 presidential election.

Jonathan Greenberg (57), a blogger holding a Memorial Day peace sign, said that he would support Clinton only if she picked Sanders or Massachusetts senator Elizabeth Warren, a hero to progressives, as her running mate to appeal to the large number of younger Democratic voters who have been supporting Sanders.

“That demographic is the future of the Democratic Party. Hillary Clinton is a dinosaur,” he said.

Toni Garrett (69), who is semi-retired and from nearby Berkeley, said that she would support Clinton in November if she is the nominee – “well absolutely, what’s the other choice?” – even though she believes Sanders’s “revolution needs to be heard”.

“She has to listen to Bernie and his supporters particularly if she doesn’t win California,” said Garrett. “She should be listening now already.”

After the rally, Sanders watched the Golden State Warriors basketball team beat the Oklahoma City Thunder in Oakland, overcoming a two-game deficit to win the seven-game series and reach the NBA Finals.

“The Warriors were down 3-1 and they turned it around and I think that that’s what we’re going to do too,” he told a local San Francisco Bay Area reporter.

“A very good omen for our campaign.”