Somali terror group Al Shabaab has released a new video featuring Donald Trump's controversial call to ban Muslims from coming to the U.S. and warning that 'the West will turn against its Muslim citizens'. 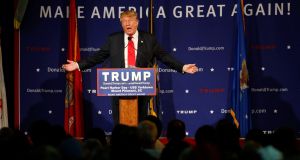 A file image of Donald Trump speaking at a rally. The SITE Intelligence Group, which monitors jihadi websites, said Al-Qaida’s branch in Somalia posted a video of Trump calling for a ‘total and complete shutdown of Muslims entering the United States’ in a recruitment video aimed at African-American youth. Photograph: AP

A video by al-Shabab, al-Qaida’s Somalia branch, criticizes racism in America and features footage of Donald Trump announcing a plan to bar Muslims from entering the country.

Al-Qaida’s branch in Somalia released a recruitment video Friday that criticized racism and anti-Muslim sentiment in the United States and contained footage of Republican presidential candidate Donald Trump announcing his proposal to bar Muslims from entering the country.

The video, released by the militant group al-Shabab, appeared to be the first time that Mr Trump was featured in jihadi recruitment material.

During a Democratic presidential debate last month, Hillary Clinton said Mr Trump had been used in a recruitment video for the Islamic State, a claim that was later debunked.

Al-Qaida and the Islamic State are rival jihadi groups that compete for recruits and money among radicalized Muslims.

Representatives for the Trump campaign did not respond to requests for comment Friday.

The video was part of a series dedicated to Somali-American jihadis from Minnesota and one Canadian who died on the battlefield in Somalia.

The video was authenticated by the SITE Intelligence Group, which studies jihadi propaganda, and it appeared to be aimed at the African-American community. Citing “historical injustices” against African-Americans, including police brutality and racial profiling, the video urged them to convert to Islam and engage in jihad at home or abroad.

In addition to footage of Mr Trump, the video, which is 51 minutes long, included excerpts from speeches by Malcolm X and unnamed white supremacists, as well as footage of white police officers, African-Americans protesting police brutality and African-American men in prison.

Some appeared to be performing Islamic prayers. Using footage of Anwar al-Awlaki, an American member of a Qaida affiliate who was killed in a US drone attack in 2011, the video also said the United States was gripped by a “malignant hatred” of Islam.

The video includes footage of Mr Trump in front of a poster with his campaign slogan, “Make America Great Again.”