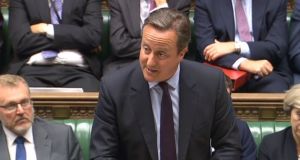 “I think the most important thing we can do is to really learn the lessons for the future and the lessons he lays out quite clearly,”prime minister David Cameron said. Photograph: PA wire

Prime minister David Cameron said the government needed to learn the lessons from what went wrong in the build-up to Britain’s joining the invasion of Iraq, in his initial response to a long awaited inquiry on the war.

Mr Cameron, the outgoing Conservative prime minister, was answering questions in parliament on the Chilcot report into mistakes made by the government of the-then Labour prime minister Tony Blair ahead of the Iraq war in 2003.

“I think the most important thing we can do is to really learn the lessons for the future and the lessons he lays out quite clearly,” he said, referring to the Chilcot report.

“The only point I would make is that there is actually no set of arrangements and plans that can provide perfection in any of these cases.

Mr Cameron insisted it would be inappropriate for him to apologise for the Iraq War as those who took the decisions are still alive.

He told MPs it is “very easy” for a prime minister to stand up and say sorry. But Mr Cameron added there were differences between the response required following Sir John Chilcot’s report into the Iraq War and inquiries into the Bloody Sunday massacre and Hillsborough tragedy.

“So I think this is slightly different to the situation over, for instance, Bloody Sunday or Hillsborough.

“This report is about a government decision and set of decisions that were taken and the people responsible are still around.

“In terms of the responsibility for apologies and all the rest of it, the government that took these decisions, the people responsible are still alive and able to answer the criticisms in the report.”

Jeremy Corbyn, who did not mention Tony Blair by name, said in parliament that MPs had been “misled” by the former premier’s government and added that those responsible for the decision to go to war must “face up to the consequences”.

He said: “There are no more important decisions a member of parliament ever gets asked to make than those relating to peace and war.

“The very least that MPs and the country should be able to expect is rigorous and objective evidence on which to base their crucial decisions.

“We now know that the House was misled in the run-up to the war and the House must now decide how to deal with it 13 years later, just as all those who took the decisions laid bare in the Chilcot Report must face up to the consequences of their actions, whatever they may be.”

Mrs Sturgeon said the revelation that Tony Blair had told George Bush, “I’ll be with you whatever” in 2002, “suggests pre-determination and lack of proper decision making”.

And she described as “appalling” the lack of preparation for the aftermath of the conflict, and the failure to properly equip troops — both of which were findings of the report.

Russia has said the Chilcot Report shows the Iraq War was “unjust and highly dangerous” and claimed it warned Britain of the consequences.

The Russian Embassy in London tweeted a graphic with the text “Keep Calm but I Told You So”.

Amnesty International UK director Kate Allen said: “It’s a tragedy that politicians and their advisers failed to properly assess the human rights consequences of such a massive military operation, including the horrible sectarian violence it helped unleash, and it’s also a tragedy that the horrors of Abu Ghraib and cases like Baha Mousa all followed.

“Hundreds of thousands of people died in Iraq, during the invasion and its extended aftermath, including UK service personnel. It’s therefore vital that lessons are learnt after Sir John Chilcot has so comprehensively pointed towards what some of those are.”