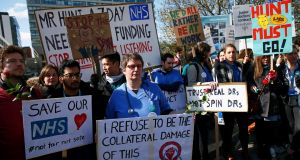 Junior doctors and supporters hold placards during a strike outside St Thomas’s Hospital in London, in April. Photograph: Stefan Wermuth/Reuters

A union representing British doctors has called off a five-day strike scheduled for next week, citing concerns about patient safety, but it stuck to plans for walkouts later this year.

The British Medical Association (BMA) had planned a full strike by junior doctors from September 12th to 16th which would have been the longest stoppage in the nearly 70-year history of the National Health Service.

Junior doctors – a term covering recent medical school graduates right through to doctors who have been working for well more than a decade – have staged a series of walkouts this year over a new contract the government plans to impose next month, which they say will compromise patient safety.

Leading health bodies and patient groups asked the BMA to reconsider next week’s stoppage given the short notice for hospitals to rearrange cover, which created potential risks for patients.

“We have listened to the concerns of working doctors, patient groups and the public,” Ellen McCourt, the BMA junior doctors’ committee chair, said in a statement.

“Thousands of you have been in touch, your level of anger over the secretary of state’s imposed contract remains high, but at the same time you want to keep your patients safe during industrial action,” she added.

The doctors’ union said it would not cancel three remaining strikes it announced last week which are due to take place between October 5th-7th and 10th-11th, November 14th-18th and December 5th-9th.

The BMA staged several strikes earlier this year, which escalated in April when junior doctors walked out of all services, including accident and emergency, for a day. A deal was reached in May between the BMA and the government.

However junior doctors, who are part of the BMA, voted in July to reject the new contract by 58 per cent to 42 per cent.

The government says the new arrangements are part of its plan to bring in a safer and more comprehensive seven-day health service. The doctors say it will result in them working longer hours at anti-social times, putting patients at risk.