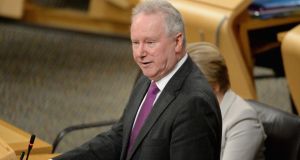 The charge was made by Mr Neil at a pro-independence rally at which he said Scotland had in three decades gone from having one of the western world’s lowest rates of liver disease to one of the highest.

The 60 per cent rise in mortality figures since 1980 was down to the decision of the Conservatives’ Thatcher-led government to close Scotland’s state-backed but ailing ship-building and steel industries and coal mines.

“It is down to one factor and that is the total lack of work and the failure to replace jobs in the traditional industries, like steel and like coal mining, with other well-paid jobs,” said the Scottish National Party minister.

‘Preposterous’
His accusations were rejected as “preposterous” by the Scottish Conservatives.

The rise in alcohol consumption in Scotland began in the 1960s, rather than the 1980s, according to figures published five years ago by the Institute of Alcohol Studies, though consumption had risen a fifth between 1980 and 2009.

The Glasgow Centre for Population Health two years ago found young and middle-aged men were more at risk of dying early in Scotland than those living anywhere else in western Europe.

Scotland is second only to Hungary for chronic liver disease deaths. In 2012, 1,080 people died due to alcohol in Scotland – 741 men and 339 women. Since 1979, twice as many men have died because of drink as women, but the numbers of women dying is increasingly rapidly.