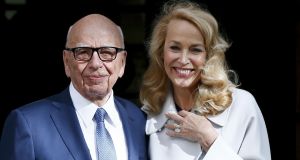 Rupert Murdoch has wed former supermodel Jerry Hall in a low-key ceremony in central London, the fourth marriage for the media mogul.

The 84-year-old executive chairman of News Corp and owner of 21st Century Fox Inc, and Ms Hall (59), smiled happily for photographers after the ceremony on Friday at Spencer House, an 18th-century mansion built for an ancestor of Princess Diana.

“No more tweets for ten days or ever! Feel like the luckiest AND happiest man in world,” Mr Murdoch wrote on Twitter.

Mr Murdoch, dressed in a navy suit, and Ms Hall, wearing a pale-grey trench coat and flat shoes, began dating last summer after being introduced while in Australia and were first seen in public together at the Rugby Union world cup final in London in October.

They got engaged in January in Los Angeles where they had been attending Hollywood’s Golden Globes awards ceremony, announcing the news in a classified advert in the Times of London newspaper, one of the many titles his group owns.

On Saturday, the couple will celebrate the marriage with a service at London’s historic St Bride’s church, famed for its wedding-cake spire.

The spiritual home of British journalism, St Bride’s was designed by Christopher Wren, who was also responsible for nearby St Paul’s Cathedral.

The church is located on Fleet Street, where Britain’s major newspapers were located from the 1700s to the 1980s. Mr Murdoch himself hastened Fleet Street’s demise as a press hub when he moved his print works to east London.

“Within months the printing dinosaur that was Fleet Street was dead. By 1989 all the national newspapers had decamped as other proprietors followed Murdoch’s lead,” the church’s own website says.

Australia’s Sydney Morning Herald reported this week that the couple’s 10 children from previous relationships would be at Saturday’s service, with the six daughters acting as bridesmaids.

A native of Melbourne, Australia, Mr Murdoch divorced his third wife, Wendi Deng, in 2013 after 14 years, saying their marriage had been irretrievably broken. Ms Deng is a former executive at Murdoch-owned Star TV in China.

He reportedly paid out $1.7 billion in a divorce settlement to his second wife Anna Murdoch, while his first wife was Patricia Booker.

Meanwhile, Ms Hall, one of four daughters, moved to Paris to pursue her modelling career aged just 16. She then met Rolling Stones’ frontman, and the couple wed in 1990 in Bali.

Their marriage was later disputed since it was not properly conducted, and was subsequently shown to be invalid. The pair had four children together, but parted after 23 years.