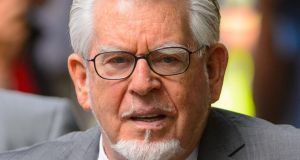 Rolf Harris, who was convicted last year of indecently assaulting young women and girls, wrote down the lyrics in a letter penned in jail File photograph: Dominic Lipinski/PA

A song in which Rolf Harris reportedly slurs his victims as “slimy little woodworm” has prompted calls for the disgraced children’s entertainer to be denied parole.

Harris, who was convicted last year of indecently assaulting young women and girls, wrote down the lyrics in a letter penned in jail, obtained by the Mail on Sunday.

In the song, he accuses the victims, the youngest of whom was just eight when he attacked her, of being after his money, writing: “Come and join the feeding frenzy, girls.”

The victims’ lawyer, Liz Dux, said that she had spoken to one of them who had told her that her feelings were of “total revulsion”.

“I am calling for this letter to be shown to the parole board and for it to be taken into account when deciding when to release him,” Ms Dux, from law firm Slater & Gordon, told BBC Radio 4.

“The whole point of parole is for people to show some sort of remorse and understanding of their actions when they return into society and here is someone who is clearly behaving as he was before, with complete disdain and an attitude that he can behave how he wants.”

Harris was sentenced to five years and nine months in prison, at Southwark crown court in London last July, after being found guilty of 12 indecent assaults dating between 1968 and 1986.

In the letter, which the MoS said it got from one of the 84-year-old’s friends who was appalled by it, Harris writes that he plans to record the song when “I get out towards the end of 2017”.

The Australian-born TV star and artist, a fixture of popular entertainment for six decades, rails about the “injustice” he has suffered but describes prison as “no hardship really”.

In the song lyrics, he describes his victims as “foul accusers”, writing: “Perhaps you believe you’re pretty still, some perfumed sultry wench.”

Ms Dux said: “It’s absolutely abhorrent and his victims will be absolutely disgusted by it. It shows the same arrogance and disdain that he displayed during the trial. It just shows that he really has shown absolutely no remorse at all and has no understanding of the lasting damage his actions have done.”

Prior to Harris’s sentencing, the court heard distressing victim impact statements about the effects of his assaults on the four women.

Passing sentence, Mr Justice Sweeney told Harris that in the case of three of the four victims, including the eight-year-old, who was seeking an autograph, he “took advantage of the trust placed in you because of your celebrity status” to carry out the attacks.

With the final victim, who Harris began grooming aged 13 - the childhood friend of Harris’s daughter Bindi Nicholls - the star abused a different type of trust; the trust placed in him by the girl’s parents.

Justice Sweeney said: “You have shown no remorse for your crimes at all. Your reputation now lies in ruins, you have been stripped of your honours, but you have no one to blame but yourself.”