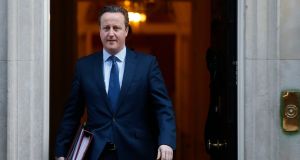 David Cameron: until the deal he made is enshrined in the EU treaty it could still be open to challenge in the European Court of Justice. Photograph: AP

Conservatives on each side of the EU referendum debate traded legal opinions yesterday after justice secretary Michael Gove claimed that the deal David Cameron won in Brussels last week is not legally binding.

In his first interview since declaring for the Leave camp, Mr Gove said that the European Court of Justice (ECJ) would not be bound by the agreement until it was written into the EU treaties.

“I do think it’s important that people also realise that the European Court of Justice stands above every nation state, and ultimately it will decide on the basis of the treaties and this deal is not yet in the treaties,” he told the BBC.

Downing Street responded swiftly and with force, rolling out its heaviest legal artillery in the person of attorney general Jeremy Wright, who said that the justice secretary was flat wrong. He said the agreement would have legal effect from the point Britain says it intends to remain in the EU, and the European court would have to take it into account.

As legal experts issued opinions throughout the day, it appeared that the two sides were talking across one another. Mr Cameron’s deal is an international agreement between 28 sovereign states and it is legally binding under international law in the same way as was the 2009 deal agreed to before Ireland’s second referendum on the Lisbon treaty.

Some parts of the deal require new EU legislation, however, and there is a theoretical risk that such legislation could run into difficulties in Brussels or Strasbourg.

And until the deal is enshrined in the EU treaty, it could still technically be open to challenge in the ECJ.

Earlier, Mr Gove’s wife Sarah Vine, a Daily Mail columnist, wrote that her husband was tortured last week as he was torn between his loyalty to the prime minister and his deeply felt conviction that Britain should leave the EU. She said that Mr Cameron was not expecting Mr Gove to join the Leave camp, so the news came as a major blow to him.

“When he eventually told David the truth about his feelings on the re-negotiations – that he was not inclined to support the deal in its current form – the PM was genuinely, and quite naturally, shocked and hurt,” she wrote.

Sir Michael had read but not signed the letter, which said that the EU was, alongside Nato, an increasingly important pillar” of Britain’s security.

“Within the EU, we are stronger. Inside it, we can continue to collaborate closely with our European allies, just as we did when we helped to force the Iranians to the negotiating table through EU-wide sanctions, or made sure that Putin would pay a price for his aggression in Ukraine, ” the letter said.