Labour MP John Mann confronts Ken Livingstone over remarks he made with regard to Adolf Hitler. Video: Vicki Young 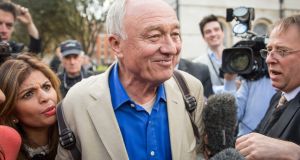 Ken Livingstone, who has been suspended from the Labour Party for comments made while defending Naz Shah – the suspended Labour MP – leaves Milbank Studios in London. Photograph: Rob Stothard/Getty Images

Labour has suspended former London mayor Ken Livingstone from the party after he said that Adolf Hitler had supported Zionism before he murdered six million Jews. The move followed a storm of protest from Labour MPs, one of whom branded Mr Livingstone a “disgusting Nazi apologist”.

The move against Mr Livingstone comes amid a controversy over anti-Semitism within the party after Bradford MP Naz Shah was suspended for comments she made on social media about Israel and the Jews. The former mayor, who is a close ally of Labour leader Jeremy Corbyn, made his remarks about Hitler while defending Ms Shah during an interview with BBC London.

“Let’s remember, when Hitler won his election in 1932 his policy then was that Jews should be moved to Israel. He was supporting Zionism before he went mad and ended up killing six million Jews,” he said.

“There has been a very well-orchestrated campaign by the Israel lobby to smear anybody who criticises Israeli policy as anti-Semitic. I had to put up with 35 years of this, being denounced because back in 1981 we were campaigning to say the Labour Party should recognise the Palestine Liberation Organisation. ”

Hitler’s persecution of the Jews escalated during his 12 years in power from a policy of violence and discrimination aimed at driving them out of Germany to the “final solution” of murdering all the Jews in Europe. Zionism emerged in the wake of 19th-century European nationalist movements with the aim of establishing a Jewish-majority state in their historic homeland of Israel.

Labour MP John Mann confronted Mr Livingstone later on Thursday at the BBC studios in London, in an angry exchange caught on camera by ITV News.

“You’re a lying racist, a Nazi apologist. You’re a disgusting Nazi apologist, Livingstone,” Mr Mann said. “You’re rewriting history. Go back and check what Hitler did. There is a book called Mein Kampf.”

The Labour leader faced criticism for being slow to act against Ms Shah after it emerged she had posted incendiary messages about Israel and the Jews on Facebook before she became an MP. Ms Shah apologised on Wednesday for sharing an image that advocated relocating Israel to the United States, adding the comment “problem solved”.

She had also urged social media contacts to vote in a poll on Israeli conduct towards Palestinians, because “the Jews are rallying”.

Mr Livingstone’s remarks on Thursday caused greater offence to Jews because they linked Hitler to Zionism and the Board of Deputies of British Jews called for his expulsion from the Labour Party. David Cameron said it was clear Labour had a problem with anti-Semitism.

Mr Livingstone defended his remarks, claiming his critics were confusing anti-Semitism with criticism of Israeli government policies. “Blurring these two things undermines the real importance of anti-Semitism, because a real anti-Semite doesn’t just hate the Jews in Israel, they hate their Jewish neighbour in Golders Green or in Stoke Newington. It’s a physical loathing,” he told the BBC.