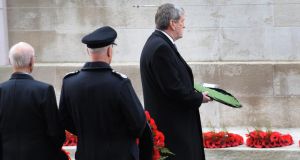 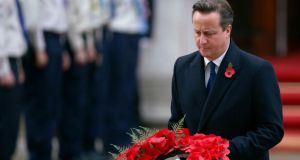 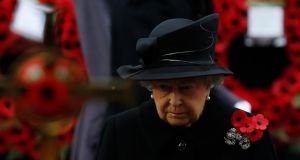 Irish ambassador to Britain Dan Mulhall today laid a wreath at the Cenotaph in London to mark Remembrance Sunday - the first time Ireland has taken part since the Republic was declared over 60 years ago.

The ceremony in Whitehall, led by Queen Elizabeth and Prince Philip, was held behind the tightest security for decades, following the arrest of a number of individuals suspected of plotting extremist Islamic terror attacks in recent days.

Mr Mulhall joined Commonwealth ambassadors at the ceremony, who were broken up into small groups to lay their wreaths. In a poignant moment, however, Mr Mulhall stood alone to lay his wreath of leaves, rather than one made of poppies.

Ireland had been invited to lay a wreath “at this and future years’” Remembrance Sunday ceremonies ‘in recognition of the immense contribution and shared sacrifice made by many thousands of Irish men and women who have served in the British armed forces’.

“Throughout the first World War, Irish servicemen stood side by side with men and women from across Great Britain and the Commonwealth. As we commemorate the centenary of the start of the war it is right we remember our nations’ shared sacrifice,” said British culture secretary Sajid Javid.

Some 200,000 men from all parts of the island of Ireland served with the British army in the first World War - 35,000 died during the war itself, but the final toll from wounds received reached nearly 50,000.

A two-minute silence was observed before Queen Elizabeth laid a wreath at the Cenotaph, followed shortly afterwards by Mr Cameron, who appeared to be close to tears at one point.

Following the creation of the Irish Free State, the Irish governor-general laid a wreath at the Cenotaph at the first Armistice Day commemorations and onwards, but the practice ended in 1939.

Both the Irish and British governments are keen to emphasise the historic ties between the countries created by the first World War. A memorial was unveiled at Glasnevin Cemetery to honour Irish holders of the Victoria Cross.

Minister for Culture Heather Humphreys represented Ireland at the ceremony in Glasgow Cathedral in early August to mark the beginning of the conflict, which was described as “a special recognition” of Ireland’s role in the British forces.