Conservatives struggle to fend off Ukip challenge in Boston, Lincolnshire 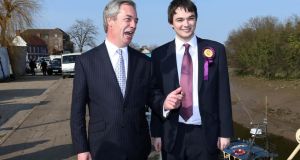 To see how immigrants from eastern and central Europe have made their presence felt in Britain, stand on West Street in the centre of Boston, a market town on the east coast of England.

Ten years ago, the street was in decline. Today it’s lively and lived-in – and strikingly cosmopolitan. It has Polish supermarkets, Lithuanian bakeries, advice centres and internet cafés. You’re as likely to hear Polish, Latvian or Bulgarian as the local Lincolnshire accent.

“When we opened here eight years ago, there was just one Polish shop,” says Sarah, who runs the Webzone internet café on West Street. “They all just appeared.” About half of her business comes from immigrants wiring money home.

Boston, a town of about 65,000 people, set amid agriculturally rich flatlands 200km north of London, has for centuries attracted outsiders. Its port made it a significant trading and fishing centre in the 19th century and in recent decades its high demand for farm labourers produced a steady flow of Irish, Portuguese and other Europeans into the town.

The latest wave began in 2004, when the UK opened its labour market to workers from 10 new EU member states, most of them in the former eastern bloc. By the end of 2013, according to the Office for National Statistics, more than half a million people from the 2004 EU entrants had moved to Britain – far more than the government had predicted.

The largest share went to London and surrounding regions, but many came to the east of England to pick fruit and vegetables and work in food factories. By 2011, 11 per cent of Boston’s population came from those 10 EU countries, prompting some newspapers to call it “the most Polish town in Britain”.

Immigration has become one of the central themes of the British election, but in Boston, the town that gave its name to the Massachusetts city, it has monopolised the campaign.

“This town has seen the devastating effect mass uncontrolled immigration can have,” says Robin Hunter-Clarke, a 22-year-old who is standing for Ukip in the constituency. He cites pressure on local schools and doctors’ surgeries and says local people “can’t get jobs because a lot of them are taken by eastern European migrants”. His solution would be for the UK to leave the EU and impose an annual cap of up to 50,000 on inward migration.

The Conservatives are expected to hold the local seat, but Nigel Farage’s party, having seen its support level soar in the constituency, will push them close.

At a hustings organised by BBC Lincolnshire in the local Blackfriars theatre on Friday night, voters’ questions ranged across the spectrum of local issues, from hospital services and flood defences to schools and infrastructure. But immigration surfaced more often than any other topic.

A division soon became apparent in the audience. One part cheered loudly when Hunter-Clarke said Ukip would cut the foreign aid budget and restrict immigrants’ access to the health service (“It’s the National Health Service,” he said, “not the International Health Service.”)

Another group applauded when the Labour, Liberal Democrat or Green candidates offered counter-arguments: the fact that unemployment in Boston is below the national average, that people on benefits should not be stigmatised, that immigrants are doing jobs English people don’t want.

It was also clear that Ukip, with the momentum behind it, was setting the terms of the discussion. Labour’s Paul Kenny said he had been pushing his party leadership for years to take immigration seriously. The Conservatives’ Matt Warman remarked immigration was a “mixed blessing”, adding: “We have to grasp the positives and deal with the negatives.”

One audience member complained of a strain on housing and social welfare.

“I don’t mind them having 12 children as long as I’m not paying for it,” said ex-policeman Alex Wilson to applause from part of the audience. Wilson planned to vote Ukip, he said after the event. “He [Farage] comes over as honest. I don’t care if someone is black, polka-dot, striped or green. Let’s have controlled immigration. We’re a little island, we can only take so many people.”

Wilson said foreigners with serious criminal offences should be deported and bemoaned “Eurocrats saying what we should do and what we shouldn’t do”.

On West Street, many eastern Europeans are acutely aware of the campaign’s focus on immigration. At her desk in the East European Advice Office, a business she opened just last week, Marta, originally from northern Poland, paints a largely positive picture of her life since she arrived in Boston nine years ago. She has English friends, her son attends a local school. But she knows not everyone approves of recent changes.

“I see some English people pass this office and when they read the sign, you see them saying ‘f***ing f*** f***’,” she says. “I wanted to pick a [business] name that was easy to see for my customers. I know English people don’t like it, but it’s good for them as well. If someone goes to the bank and can’t speak English, that’s a problem for them. An office like this is good for England as well. But not everyone thinks that way.”

Sitting on a bench across town, taking a break from his weekend shopping, Frank Maskell, a warehouse manager, laments the direction of Boston’s politics.

Originally from Liverpool, Maskell describes himself as a socialist and a committed Labour voter. “They’re tapping into people’s fears, especially in places like this, where there are a lot of migrant workers,” he says. “It doesn’t worry me – it brings a lot to the community. I don’t see all these businesses complaining about all the new customers.”

At his warehouse, 70 per cent of the staff are from eastern Europe and he rarely sees an English candidate applying for a job.

But Maskell doesn’t underestimate Ukip’s power. Even his wife and two daughters are thinking of voting for the party, and he thinks there’s a “strong possibility” it will win the seat.

“There’s been a massive shift in people’s opinions about politics in the last 10 years,” he says. “When Ukip started, people put them in the same bracket as the Monster Raving Loony Party. Now it’s socially acceptable to be in the Ukip camp.”