Poet’s memory was celebrated in music, poetry and laughter in London last night. 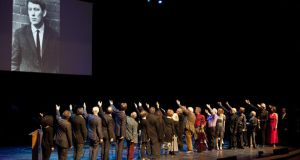 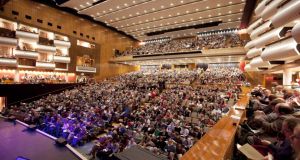 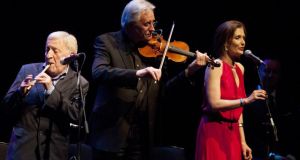 In the darkness, on the bank of the Thames, Seamus Heaney’s voice, one so recently gone, filled the hall, “Between my finger and my thumb. The squat pen rests; snug as a gun.”

Tickets for the celebration in the Southbank Centre’s Royal Festival Hall of the life of Ireland’s greatest modern poet had been gone for weeks, with holders warned to hand back the unwanted.

A photograph of Heaney as a young man filled the backdrop, photographs that aged as the evening progressed, telling the story of his life through the changes in his poetry.

The uilleann pipes of Liam O’Flynn and Neil Martin’s cello set the Irish tone for the evening, one captured later by the The Chieftains with “Lullaby for the Dead”.

Poet, Andrew O’Hagan described his late friend as “an anchor for poetry” who had replenished the imagination, one whose every word issued tolerance.

The Derryman, now buried in his native Bellaghy, had brought “the voice of the pastures and the inner ear”, first to the New Statesman magazine in 1964 and later to a grateful world.

“He loved other poets all his life, he loved them for their own talent,” said O’Hagan, telling of how younger acolytes believed he had encouraged, guided, occasionally pressed.

Northern Ireland and the Troubles was never far away. Heaney had, said O’Hagan, questioned patriotism in “Burial of Thebes” and later the relationship of the individual to the State.

One of those poets that Heaney encouraged, Paul Muldoon read from “Keeping Going”, which begins with the making of whitewash for a country byre before darkening to tell of the murder of an RUC reservist by the IRA as he stood waiting for a morning lift to work.

“Grey matter like gruel flecked with blood In spatters on the whitewash. A clean spot Where his head had been, other stains subsumed In the parched wall he leant his back against That morning like any other morning, Part-time reservist, toting his lunch-box.

A car came slow down Castle Street, made the halt, Crossed the Diamond, slowed again and stopped Level with him, although it was not his lift.

And then he saw an ordinary face

For what it was and a gun in his own face,” read Muldoon.

Writer, Edna O’Brien, from Co. Clare, read from “Postscript”, a Heaney poem that captures the buffeting winds of the West of Ireland on “a slate grey” day, where “big soft buffetings come at the car sideways And catch the heart off guard and blow it open

Charlotte Higgins left an aching sadness behind as she read from Heaney’s Blackberry Picking, a poem which captures the fragility and lack of permanence of Nature, where each year a young Heaney hoped his crop would “keep, knew they would not”.

By the end, The Chieftains had the 2,500-strong clapping in the aisles as one tune followed another, with O’Hagan saying that the only thing missing was whiskey.

The tribute,O’Hagan believed, had remembered “a truly original writer in the perfect context. “He would have been embarrassed, but secretly pleased.”

Quoting another poet, Heaney had once jokingly said such moments were “excessive, but not enough”, O’Hagan declared, to laughter from the audience.