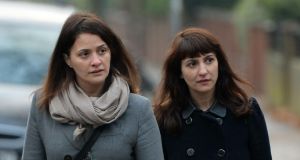 Nigella Lawson’s former personal assistant “frequently” found rolled-up banknotes with white powder on them in her handbag, she told a court.

Francesca Grillo, who along with her sister Elisabetta is on trial accused of defrauding Ms Lawson and former husband Charles Saatchi, said she never saw Ms Lawson taking drugs although she did find evidence of drug use on many occasions.

She said she first saw the rolled-up notes at the food writer’s Shepherd’s Bush home, in the kitchen after a party and also in a guest bedroom.

One of her jobs as Ms Lawson’s aide was to exchange items between her handbags, and she would find rolled-up banknotes in those, she told Isleworth Crown Court in west London on Tuesday.

Asked how often she found the banknotes, Ms Grillo said: “Frequently. Every time I went through her handbag there was some notes. It was very frequent.” Asked if she ever raised the issue of drugs, she replied: “No. I didn’t think it was my place.”

Ms Lawson would tell Francesca “you’re good at finding things” and ask her to look for belongings in her handbags, the jury heard. She told the court Ms Lawson mislaid things “very often”, adding: “Keys, her phone, her mustard.” Asked to clarify, she said: “She likes to carry a tube of English mustard. I know it sounds weird but that’s what it is.”

Ms Lawson would sometimes come downstairs with white powder on her nose and Francesca would point it out to her, but would be told by the cook it was make-up.

Asked by defence counsel Karina Arden if the substance could have been make-up, Ms Grillo replied: “Too white to be make-up.” She also noted that the TV cook often had a runny nose, the court heard.

Ms Grillo also recalled how she improvised an excuse to protect her employer when a child discovered a hollow book containing what the employee thought were drugs. The defendant told the court: “She [the child] said ‘Look what I found in [the] book!’. It was a small plastic bag with white powder. I made up something.”

She said she found cannabis in a child’s room in the home, and the television cook would swig from bottles containing liquid medication. She told the court: “Tazepam, Xanax... Ms Lawson had medication for depression. She would take it directly from the bottle.”

The witness said Ms Lawson later became “absent and grumpy”, and had trouble sleeping. She told the court she did not originally mention the alleged drug use in her first statement to police, but did so after photographs of Mr Saatchi and Ms Lawson at Scott’s restaurant in Mayfair emerged in the press during the summer.

She said: “In the photos she appears to be crying. It shocked me because she said she didn’t cry very often in public. The one that stuck in my mind was the one of him picking her nose. Maybe he found something relating to drugs.

“I maybe thought if he didn’t know that, he probably didn’t know about the authorisation — the allowance — of the signatures [by Ms Lawson, on personal expenditure].”

Francesca Grillo, (35), and her sister Elisabetta, (41), are accused of defrauding the celebrity couple by spending £685,000 on credit cards belonging to them. The court has heard the siblings bought designer clothes, shoes and luxury holidays on the cards.