Warning that Irish in UK could be ‘outsiders’ after exit

A week before Britons vote in a referendum on EU membership, campaigners from the 'leave' and 'remain' camps hurl abuse at each other on rival boats in bizarre scenes outside parliament on the River Thames. Video: Reuters 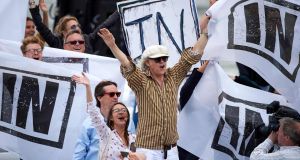 A boat carrying supporters for a Remain vote in the EU referendum including Irish singer Bob Geldof (centre) shout and wave at boats supporting a Leave vote as they sail on the river Thames. Photograph: Getty Images

The Government is to begin a major campaign to assure global investors Ireland’s place in the EU is secure if the UK decides to quit in next week’s referendum.

Meanwhile, Opposition leaders will be given a briefing today on the Government’s contingency planning to cope with an exit decision in the June 23rd vote should it occur.

Taoiseach Enda Kenny told the Fine Gael parliamentary party last night Ireland would not hold a vote on its future in the EU. Mr Kenny said regardless of the outcome of the referendum Ireland would remain a committed member of the EU.

He said Brexit would have serious implications for Ireland and the Government would do everything in its power to prevent such an outcome.

Minister for Public Expenditure Paschal Donohoe yesterday warned Brexit would cause huge uncertainty and could hit growth targets , while Minister for Social Protection Leo Varadkar said it would mean Ireland loses “an ally and Europe is weakened”.

Mr Kenny, who today begins a two-day campaign in Manchester and Liverpool to encourage a Remain vote by Irish people living in Britain, has complained about the referendum campaigns run by Northern Ireland political parties.

“There is evidence of little activity from the political parties on the ground in explaining to people what this referendum is about and the consequences for Northern Ireland,” he said.

The Government is officially tight-lipped about preparations for a “Leave” vote, but plans have been drawn up for a commercial, diplomatic and political campaign to advertise Ireland’s continuing position as an EU member.

Promising “a huge campaign all over the world”, an informed source said a strong campaign is needed in the US, China and India and elsewhere to drive home the message that Ireland is separate from the UK and that it intends to stay in the EU.

“Therefore, you can only have new border controls between the Republic and Northern Ireland or, which I would regret hugely, you would have to have some sort of checks on people as they left Belfast or other parts of Northern Ireland to come to the rest of the UK.”

Meanwhile, former president Mary McAleese warned Irish people living in Britain could become “outsiders” after an exit vote. “If any Irish person thinks that they are exempt from the box called ‘immigrants’, let them think again.”

Mr Varadkar has urged all Fine Gael TDs to contact all British people living in their constituencies who have the right to vote in the referendum to encourage them to vote to stay in the EU.

UK citizens living in Ireland, as well as Irish citizens who lived in the UK during the past 15 years, can cast a ballot in the referendum. The last Irish census in 2011 showed that 288,627 people listed their place of birth as being in the UK.