British Prime Minister David Cameron says support for EU deal will pave way for an early referendum on the UK's European Union membership, which must be held by the end of 2017. 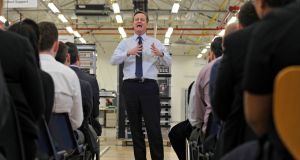 David Cameron has fired the opening shots in Britain’s EU referendum campaign, hailing a draft agreement from European Council president Donald Tusk as “the best of both worlds” for Britain.

The prime minister said that, if the proposals are accepted at a summit in Brussels this month, he will lead the pro-European campaign in a referendum expected to be held in June.

“If we get this deal in February or in March or later and if the cabinet agrees to this deal, the government’s position will be to campaign for Britain to stay in a reformed European Union, ” he said.

Mr Tusk’s draft agreement proposes an “emergency brake” that would allow countries to curb in-work benefits to migrants from other EU countries for up to four years should their welfare system be deemed to be under “exceptional” strain from immigration.

But the document contains no final figure for the duration of the “safeguard mechanism”, raising the prospect that this could become a key subject of contention in the next two weeks.

It also suggests a “graduated” limitation, rather than an outright ban on benefits, which would gradually increase “to take account of the growing connection of the worker with the labour market”.

The Government welcomed Mr Tusk’s proposals as an important step in Britain’s negotiations with the EU, and Minister for Foreign Affairs Charlie Flanagan said they represented “positive progress”.

British Eurosceptics, however, dismissed the draft deal as representing little change in the relationship between the EU and Britain.

EU leaders will discuss the document at a summit in Brussels on February 19th.