Artists tour Scotland looking for a Yes to independence

Musicians, actors, artists and writers embark on a concert tour under the banner ‘Yestival’ 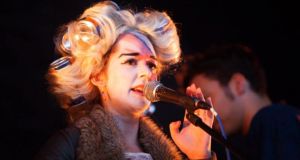 Lady Alba, complete with Irn Bru cans as curlers in her hair, on stage at the Yestival concert in Stirling.

Mairi McFadyen shelters from the rain in a tent in the yard of Stirling’s old jail, watching artists on a small stage urge a Yes vote in September’s Scottish independence referendum.

For the past six weeks, McFadyen and a small group of colleagues from National Collective – which describes itself as “artists and creatives for Scottish independence” – have been on a concert tour of Scotland under the banner “Yestival”.

The Stirling crowd is small, perhaps 100 or so, but the August night is foul. “On the Shetlands we got a bigger crowd than David Cameron managed to get on the same day,” she said.

On stage Lady Alba, based on Lady Gaga and the creation of PhD scientist Dr Zara Gladman (27), wears Irn-Bru cans knitted into her platinum wig.

“We all live in a yellow nuclear submarine going down the Clyde while one in four children live in poverty,” sings Lady Alba, who has become a minor hit on Facebook.

Up to now, the majority of artists of all hues who have spoken out about independence have declared for Yes, although a minority have not, while many have stayed silent. “A positive clamjamfry of writers, artists, actors and musicians are actively supporting the Yes campaign and who can blame them?” said Scottish-born, London-based actor, Bill Paterson recently.

“To paraphrase the poet, ‘Yes is a great wee word’. It sounds kinder. It’s just nicer to say. It’s progressive. It’s the very definition of positive.

“It makes you feel that you have the reins in your hand to change society, and that’s the way people in the arts want to feel,” he said, in a gently mocking piece he wrote for the Scottish Review.

Writer JK Rowling’s thoughtful, measured critique of the independence offering – she is voting No – was influential when it came, but the effect of such contributions fade with time.

Ross Colquhoun, the graphic artist who who conjured up National Collective in his bedroom, insists the artists’ group has touched a nerve with strands of Scottish society.

Today, he says it has 3,000 full members and plans for life after the referendum.

“Artists are used to taking risks, they are used to imagining something new. Change is not seen as a threat,” he says, dripping with rain.

Even the devil has been drawn into the referendum battle, featuring in a play at the Edinburgh Fringe as Black Donald where he describes manufacturing the 1707 Union with England as “my greatest hit”.

Like many others in Scotland’s artistic community, actress/model Eunice Olumide (27) was drawn to the Yes side “because of the aggressive negativity of those on the other side, who never have anything positive to say”.

Raised by Nigerian parents in Glasgow, she says: “I never learned anything good about Scottish until I went to study in the University of Pennsylvania in America.

“Britain is not as good as people think, the Trainspotting culture is real,” she declares.

For now, such artists have a voice, but it is not clear if they have an audience, even though many Scots are looking for guidance from non-political quarters, since they despair of getting clarity from politicians.

Interestingly, much of what the SNP has done in office – its desire for lower corporation taxes, for example, or Alex Salmond’s cautious independence – is disliked intensely.

By now, the rain in Stirling has got heavier, leading organiser Zara Kitson to take up the microphone to offer plastic ponchos hurriedly bought from the tourist office.

“People are voting No for selfish reasons, because they are scared,” says recently married Ms McFadyen (29), who works in Edinburgh University.

“I don’t care if we are economically poorer, as long as we have control over our own country and have to take responsibility for our own mistakes.”

Many in Scotland’s cultural world would agree. Even if they are inspired by such attitudes, it is as yet far from clear whether the rest of Scotland is ready to follow their lead.