A video obtained by police last year shows Toronto Mayor Rob Ford, who has admitted to using crack cocaine, inhaling some kind of vapor from a glass cylinder, according to police documents unsealed on Wednesday. (Mar 19) 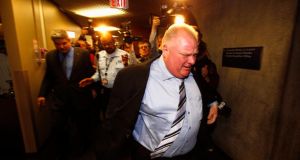 Toronto mayor Rob Ford tries to get away from media personnel after exiting an executive council meeting in Toronto yesterday. Photograph: Mark Blinch/Reuters

A video obtained by police last year shows Toronto mayor Rob Ford, who has admitted to having used crack cocaine, inhaling some kind of vapour from a glass cylinder, according to police documents unsealed yesterday.

The documents also said some of Ford’s meetings and calls with friend and occasional driver Sandro Lisi were “indicative to that of drug trafficking” and showed police asked for a warrant to access some of Mr Ford’s phone records.

The mayor has not been charged in the investigation, and allegations in the documents have not been proven in court.

Mr Ford, who is running for re-election, made international headlines last May when media blog Gawker and the Toronto Star newspaper said they had seen a video that appeared to show him smoking crack.

In October, Toronto police chief Bill Blair said his force had obtained a video consistent with media reports, but did not describe it in detail. Days later, Mr Ford admitted he had smoked crack, probably in a “drunken stupor”.

“The video appears to have been filmed surreptitiously showing Mayor Ford consuming what appears to be a narcotic,” said the documents released yesterday.

“This is old news. I don’t know why everyone’s rehashing this,” said Dennis Morris, Ford’s criminal lawyer, in an interview with local network CP24. Mr Morris said the police clearly do not have enough evidence to lay charges.

“The mayor is the victim, and I don’t know why they’re pursuing him,” he said.

The documents are linked to Project Brazen Two, an ongoing investigation by Toronto police that has already resulted in extortion charges against Mr Lisi.

Portions of the documents released last year showed the mayor had been under surveillance for months, but Toronto police have not said whether they believe Mr Ford played any role in the scheme.

Several local media outlets teamed up and went to court to have the documents unsealed. The group is still seeking access to other, related documents. Reuters